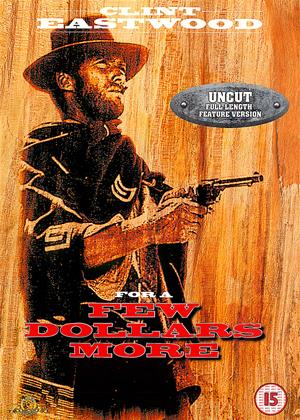 Reviews (2) of For a Few Dollars More

Eat Your Heart Out, Tarantino! - For a Few Dollars More review by Count Otto Black

This extraordinary film shouldn't really work because by normal standards it's a bit of a mess. The script seems to have been written very quickly, and sometimes makes no sense whatsoever. The plot device of the bank in El Paso, which everyone knows can't be robbed, going out of its way to set up a completely unnecessary loophole whereby it can be robbed after all if anybody finds out the secret. The bad guy's self-defeating strategy in the final part of the film - is he supposed to have a death-wish, or did the scriptwriters just land our heroes in so much trouble that they couldn't think of a plausible way to get them off the hook? And of course those strange bits of business where we're constantly given visual hints that Clint Eastwood has something wrong with his right hand, so he can't shoot very well unless he wears a custom-made leather glove, yet nobody ever explains this or refers to it directly, as if they're hoping we won't think about it too much. I guess that's because it was supposed to be a reference to Clint's hand getting broken in the previous movie, and it was only after filming was complete that anybody noticed he'd been wearing the glove on the wrong hand.

But none of this matters. These larger-than-life characters don't inhabit our reality, and we're not supposed to think they do. They're demi-gods to whom the normal rules don't apply. Lee Van Cleef's Colonel Mortimer in particular is an angel of death so implacable that ordinary people are instinctively terrified of him, and he's packing an arsenal fit for a steampunk James Bond. One of the few serious mistakes this film makes is not letting him use all of it. I would have loved to know why he needed a pistol with a ludicrously long barrel. And what's that medieval-looking thing between the rifle and the shotgun? Clint Eastwood's Manco (the American print was slightly trimmed so that he really was The Man With No Name as promised in the trailer) is exactly who he was in the first film, but this time, instead of that annoying bartender, he gets to swap plot exposition dialogue with somebody who is his equal, and in some ways better.

As for the baddies, did you ever see a nastier-looking crew of desperadoes? If you pay attention, you'll notice that most of them get no lines and have very little to do in the way of acting. That's because they were real Spanish mountain men who weren't very different from the bandits they were playing. Some of them got their parts by defeating rival applicants in knife-fights, and one man who wasn't chosen stabbed the assistant casting director in the stomach. El Indio himself, although Gian Maria Volonte's overacting does sometimes get a bit out of hand (Sergio Leone put him through multiple unnecessary rehearsals in the hope of tiring him out too much to go completely over the top, but it didn't always work), is evil personified. That sermon he preaches in a desecrated church about a good carpenter corrupted by greed practically qualifies him to be the Antichrist!

Even the sets have a lot of personality. The El Paso set was so well-built that it's still standing, and you can have a drink in the bar where Lee Van Cleef was incredibly rude to Klaus Kinski. And of course there's Ennio Morricone's indispensable music. This score, based around the haunting melody of a musical watch El Indio is strangely obsessed with for reasons that eventually become clear, is one of his best. This is a gloriously archetypal western which does everything it's supposed to in grand style. And if it doesn't bear much resemblance to the reality of life in 19th century America, that's not a fault but a bonus.

Sergio Leone's follow-up film to 'A Fistful Of Dollars' again stars Clint Eastwood as 'The Man With No Name' – but actually, he does have a name. In the first film he was called Joe (at least by the undertaker / coffin maker) and here he's called Manco (= Spanish for 'one armed' or something) – watch as he does everything left-handed, except shoot. But that's just trivia... The film is a superb example of the spaghetti Western, plenty of taut action and tongue-in-cheek dialogue, knockabout violence and a high body count. The film deserves its high IMDB rating – it's currently (March 2012) at #117 in the Top 250. This is my 3rd favourite Western after 'The Good, The Bad And The Ugly' and ' Once Upon a Time In The West', both of them epic tales and also directed by Sergio Leone. And among my other favourites I'll add in 'High Plains Drifter' and 'Unforgiven' both directed by and starring Clint Eastwood. Spot a pattern here? After growing up watching black-and-white TV shows of Westerns and (cowboys and Indians, US cavalry, hard done by widows ranching alone etc) and black-and-white films at the Saturday morning pictures (same subjects plus the Lone Ranger) the spaghetti Western came as a bit of a culture shock after years of seeing John Ford films starring John Wayne. I'm pretty sure that the West was never quite like this, but it makes a darn good tale :) Highly recommended – 5/5 stars.