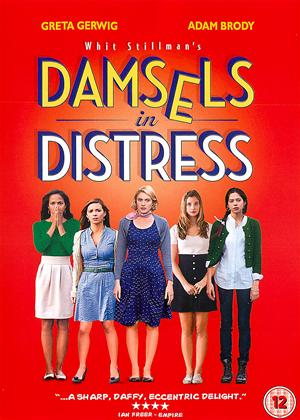 Reviews of Damsels in Distress

Whit Stillman films are about white rich people living in their rich bubble. He’s done it time and again in the 90’s – ‘Metropolitan’, ‘Barcelona’, and ‘The Last Days of Disco’ – and now he’s back to the fray, this time focusing on four young college women studying in New England, led by indie fave Greta Gerwig (‘Greenberg’) as Violet. In ‘Damsels in Distress’, Stillman proposes a group of women who are perky and privileged that they can’t help but help other people, particularly a suicide prevention program where they hand out – not just advice – but also donuts and tap dance lessons. Unconventional and quirky, yup, but if it gets the job done, why not?

The heart of the story is Greta Gerwig’s Violet. Although not a likeable character at first, what with her opposition to individuality and conservative views, she grows on you because she’s complex even if at first notice you may think she’s bland. On the opposite of her is Lily (‘America’s Next Top Model’ finalist Analeigh Tipton), a spitfire personality who has a penchant to fall in love with the wrong guys.

In fact, Violet and Lily even manage to get into a love triangle with a cute but totally a cad guy (Adam Brody). But don’t get fooled; ‘Damsels in Distress’ is not a formulaic romantic comedy. It is really a formulaic Whit Stillman work, not exactly for the mainstream and also, an acquired taste.

In the end, ‘Damsels in Distress’ is a good comeback film for director Whit Stillman – for his fans at least. Also, beware of the dance numbers. Seriously.