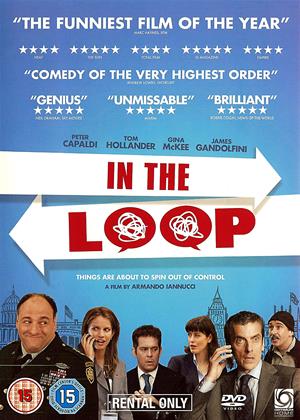 Ruined by obcenities - In the Loop review by CP Customer

The opening barrage of endless obcenities really set the tone for this film, which could have been so much better. I stuck with it but, when the 'c' word was added to the mix, I lost all hope. Beware, if like me, you think that gratuitous foul language has no place in a family home, avoid this film. How the 'mighty' BBC have fallen and to think that they banned pirate radio!

Love it or hate it. - In the Loop review by CP Customer

My parents said "rent this film, its brilliant"... so I did and I hated it.

Some of the humour was ok but I found it pretty tedious (swearing, swearing and more swearing) and ended up giving up on it after 40 minutes and doing something more useful.

Its one of those films where you will love it or hate it. Personally I thought it was dreadful.

A great script and some wonderful lines. It is cetainly worth watching for the Alastair Campbell character alone. The big weakness is that unfortunately he is overused and consequently the other characters feel underdeveloped and one dimentional. The jokes fly think and fast - sometimes they hit but occasionally they miss (the line about driving a person to assisted euthanasia for instance was poorly judged in light of the Dr David Kelly affair).

Politics Can Be Fun - In the Loop review by CP Customer

One of the best comedies I've seen in several years, never mind from the political spectrum. It seems the UK government is held in shape by the spin doctor team - nothing can be said without their approval. So when one lowly minister offers the US administration the opportunity to validate their war plans, all hell breaks loose. Tom Hollander is sensational as the surely psychotic spin chief who seems to run a department of demented Scotsmen. His sidekick is perhaps even more demented! Outstanding piece of entertainment with so many great one liners.

Awful - In the Loop review by CP Customer

Can't believe I rented this: a loud sweaty bloke is wearing to say the least and he seemed to be the central theme to the film. Difficult to make head nor tail or characters I didn't really care about and if there was a storyline I didn't notice it....

An extreme case of coprolalia - In the Loop review by DJ

l believe it is all to do with one's upbringing, but having recently viewed the beginning of this film, I find it synonymous with the present day establishment in the House of Commons.  In this respect, I'm believing that this film was written and produced by an 'insider', who knew more than most about those involved in politics.  Were it to have been considered a lampooning of the political establishment in the past, today it is pretty close to being a documentary!  A personal opinion, of course.

The language is totally unacceptable, unnecessary and unworthy of the name entertainment, however, there is a group of the younger set who will doubtless enjoy the coprolalia, and it may even go unnoticed by those suffering from the same syndrome.

Five minutes into the film, including the titles, it was ejected.  I think that says it all.