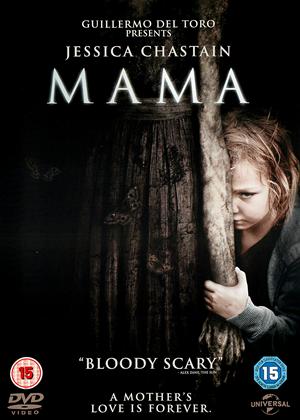 Victoria (Megan Charpentier), Lily (Isabelle Nélisse), and Annabel (Jessica Chastain) are this movie, the two young girls performances are a credit to them and Jessica Chastain's interaction with them is credible getting stronger as the movie plays out. Though I admired the acting of this actresses, I couldn't help but feel there was something missing throughout the story, it may have been the lack of fluidity overall or that the 'scary bits' at times lacked in the 'scary' department. I sometimes wish that movie makers sometimes reminded themselves that in the genre of horror, its not necessarily what a viewer see's or hear's in a movies that grips them, it's also sometimes what's also 'planted' in their imaginations by those same movie makers, which keeps the viewer talking about their movies long after watching them.

In the case of Mama (2013) I can say though I have given it 3 stars, overall I neither disliked it or liked it.

Two young girls, Victoria (Megan Charpentier) and Lily (Isabelle Nélisse), are whisked away by their fugitive Father and abandoned in the woods. After five years of living in seclusion, the girls are discovered and returned to the care of their loving Uncle, who never stopped searching for them. Telling tales of a mother-figure who looked after them during their ordeal, the claims are dismissed as nothing more than shared trauma. Little do the adults know, “Mama” has followed the children home.

Based on a 2008 Spanish language short film, ‘Mama’ is an accomplished debut from director Andy Muschietti, who deftly illustrates just how fragile a young mind can be and how important it is to have the right parent crafting them.

The children in question have no end of candidates, with seemingly the entire cast wanting to raise them at one time or another; from their murderous father, the monstrous ‘Mama’ and to the unlikely pair of Lucas (Nikolaj Coster-Waldau) and Annabel (Jessica Chastain), whose hedonistic lifestyle leaves them the last people you’d want raising children. However, their journey towards becoming the parents Victoria and Lily need is the backbone of the film and one well worth taking. Credit in particular going to Jessica Chastain for her performance as the initially unlikeable Annabel.

The Monster, “Mama” is an effectively fearful presence throughout the film, shown mostly in glimpses or off-screen entirely, until in the film’s denouement she inspires true terror by contorting herself in all manner of ways. Though not always reliable, unpredictably ranging from ridiculous to scarily realistic, the CGI comes together in the final set-piece, conjuring memories of producer Guillermo Del Toro’s own Pan’s Labyrinth.