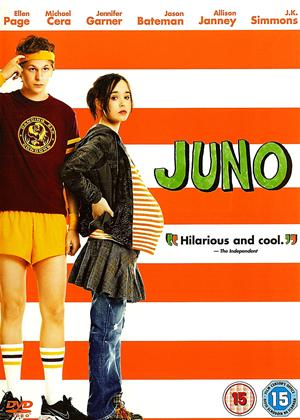 A fantastic quirky film with off-beat humour and ordinary, yet appealing, characters. A brilliant script and great soundtrack. The actors all put in top notch performances. Highly recommended.

I approached this movie rather warily as I doubted whether it could be as good as the buzz claimed during its cinema release, but I was charmed from the outset- Ellen Page is just brilliant, the script is super-smart, the supporting cast are all very convincing, the soundtrack is spot-on… it’s only with hindsight that the unlikeliness of it all starts to kick in; not so much the teen pregnancy itself, but Juno’s down-to earth response to it and everyone’s acceptance that she knows best. Must be the parent in me! A minor quibble, though, because “Juno” is that rare thing- a well-written, beautifully acted film featuring likeable characters dealing with believable situations.

Firstly, I was very relieved to find this wasn't an anti-abortion, anti-adoption film.

That said, it hasn't so much a script, as a series of one-liners strung together. Juno is a smart, tough cookie, for sure. But am I really the only one who found her smug and, frankly, irritating? And I agree with other reviewers who found her complete lack of even the slightest alarm at finding herself pregnant after having sex for the first time, and the way she treats the whole thing as a mild annoyance, unconvincing. In a nutshell, while her boyfriend is original and adorable and her dad and stepmom likeable and believable, I just didn't like Juno herself. Which is always a downer in a movie...