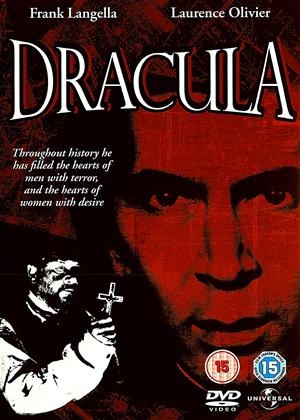 A magnificent swooping shot towards and over Castle Dracula fades into an equally epic shot of The Demeter, the doomed ship that holds the casket containing Dracula, being rocked by a punishing storm – all with the backing of John Williams’ bombastic musical score. It’s clear this lavish production intends to be as spectacular as possible.

Interestingly, the characters of Mina (now Van Helsing’s daughter) and Lucy (Kate Nelligan) are swapped for this version: Mina is already sickly and prone to unpredictable behaviour even before Dracula’s arrival.

We have Trevor Eve’s rather sulky Jonathan Harker, Donald Pleasance forever eating or chewing as Dr. Seward and Laurence Olivier as a frail Abraham Van Helsing – Olivier’s health was precarious throughout filming, but he went on to live ten more years and continued making films.

In 2004 Director John Badham made the bizarre decision of draining much of the film’s colour for the DVD release. The result, especially for the scenes inside Castle Dracula, play almost like a black and white film (perhaps that is the intention. There are certainly similarities between this and the 1931 version: both films are based on the Hamilton Deane and John L. Balderston stage version, and both feature leading men who helped make the theatrical runs so popular). The resultant imagery however, has scenes that are visually very flat.

A sequence that looks out-of-place, beneath its own glossy over-production, is when Dracula enters Lucy’s room and seduces her. Striding through plumes of machine-generated smoke, the following canoodling melds straight into laser-lit choreography, with whirling dry ice, blood red lighting and cartoon bats. Flamboyant it might have been in 1979, this is the only scene that dates the film.

Having said that, the set-piece that most remember is that of a vampiric Mina emerging from the sewers to entice Seward and Van Helsing. Beginning as a reflection in a muddy pool of water (vampires cast no reflection – indeed, Dracula is not shown in the mirror as he enters Van Helsing’s room), she looms from the shadows as a frightening, ragged, decomposing spectre. Brilliant and terrifying this transformation is, from the lovely Jan Francis into a monster, I’m not sure it makes a lot of sense – Mina has only been dead a short while, and vampires are known to retain their youthfulness once bitten, not decay as Mina has done (only in death does she revert to her original self).

Equally, Dracula’s eventual demise stretches things a bit. The notion that old Van Helsing, dying from being impaled, manages to hurl a hook in The Count’s back with enough force to embed itself enough for him to then to be winched into the sunlight is difficult to invest in.

These niggles aside, this is a powerful and vibrant adaption, and highly enjoyable. Released around the same time as Werner Herzog’s ‘Nosferatu’ and the George Hamilaton-starring ‘Love at First Bite’, its commercial impact was compromised a little, which presumably scuppered further interest from Universal.