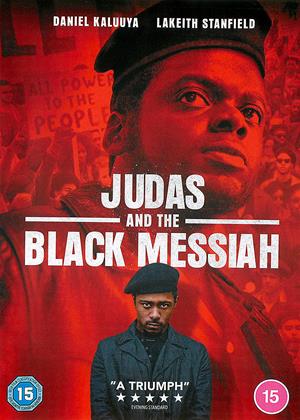 Rent other films like Judas and the Black Messiah

Reviews of Judas and the Black Messiah

In 1989, Bill O’Neill gave an interview on the PBS program Eyes on the Prize where he divulged his involvement with the FBI in being an informant against the Black Panthers. He found himself at a loss for words about what future generations would think of his involvement. Shortly after the interview aired, Bill committed suicide.

Judas and the Black Messiah reveals both his story from the 1960s but also that of the Black Panther leader Fred Hampton. We get to know Fred (Daniel Kaluuya) as someone devoted yet bitterly weary at times to sticking up for his community. He remains firm in his loud speeches that inspire those fighting back against revolution to press forward and never cave. He’s taken in by the police at one point and urges nobody to oppose the police, accepting his incarceration as a chance to see more of the oppressed and keep strong his desire to keep fighting.

Bill (Lakeith Stanfield) finds himself being placed in an uncomfortable position of being an informant. After being caught impersonating an FBI officer to steal cars, he’s given a choice by FBI agent Roy Mitchell (Jesse Plemons); spy on the Black Panthers or spend time in prison for his crimes. This leads to Bill getting far too close to both Hampton and the Panthers, becoming so close that he could be killed at any moment, either by the party or the local police force placing aggression on black neighborhoods to squash out a revolution. And with another mole spoken of among the Panthers, every day seems like a tense one for Bill, despite being such a believable member of the party.

There’s a lot of powerful scenes present for all three of the top actors present. Kaluuya is such a natural at being an intimidating figure that it’s no shock his moments of rallying and inspiring are overflowing with fury. Stanfield has the perfect blend of desperation and confidence to play such a conflicted character, always trying to seem like he knows which direction he’s going even if there seems to be no safe route. Even Plemons shines for a particular piercing moment when he’s cornered by FBI director J. Edgar Hoover (Martin Sheen) and asked if he would let his daughter marry a black man. Roy doesn’t seem to have much of a problem with black people given his ease of working with Bill but he can’t quite shake that what the FBI is doing is inherently racist.

But there should be some praise showered upon Dominique Fishback for her strong and quiet portrayal of Fred’s girlfriend Deborah Johnson. She believes in what Fred is doing but is fearful of her life, especially when she becomes pregnant. Though she doesn’t seem to get as completely involved with the shootouts and standoffs with police, she still works behind the scenes as a powerful writer. It may not seem like she’s doing as much but her son would eventually carry on the legacy of Fred, keeping the movement alive for future generations to fight back against racism.

Judas and the Black Messiah does touch on some exceptional and important moments in the fight for racial equality. But it’s also more of a mash of great performance that sprawls out all over the place, never feeling as though they have enough room to explore. There are about three powerful pictures housed within this film and it’s tough to watch them all struggle to get into the frame. The bits and pieces that are there, however, make up a very stellar showcase of a story that needs to be told for however much outrage it can inspire in us to build a better world.