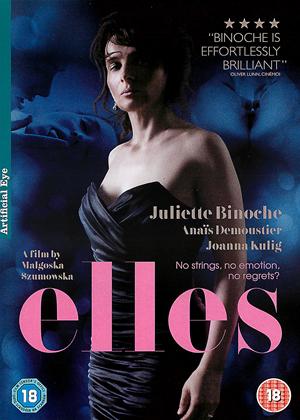 Juliet Binoche stars as an unhappily married magazine journalist who is writing an article on student prostitution for ELLE France. Despite being initially intrigued by the movie’s concept ultimately Elles was a considerable disappointment, depicting prostitution through rose tinted glasses and equating Binoche’s marriage to the basics of the high class sex trade.

From the get go their relationship that develops between Anne and the girls is somewhat pallid and unbelievable; these girls who seem happy with their decisions find their desire for beautiful clothes and a nice house fulfilled with almost no repercussions whatsoever. Whilst Anne finds herself returning home to her emotionally distant husband and ignorant sons. Undervalued at home and overworked in her career Anne’s only opportunity to relieve her personal tension comes in the form of an awkward masturbation scene on her bathroom floor which is followed by her breaking into tears. Juxtapose this with the shots of Charlotte and Alicja with various clients and Anne definitely seems to be in the wrong occupation.

Despite the strength of Binoche’s performance – which to be honest, you would expect for her regardless – Elles is simply a little vapid and unimaginative. The black and white contrast between Anne’s traditional but unpleasant home life and the socially unacceptable life choices made by Charlotte and Alicja is too simplistic and doesn’t offer enough to even make the characters particularly engaging. The connections in the plot are flimsy and unimaginative and ultimately Elles looses all potential even held by the initial synopsis.