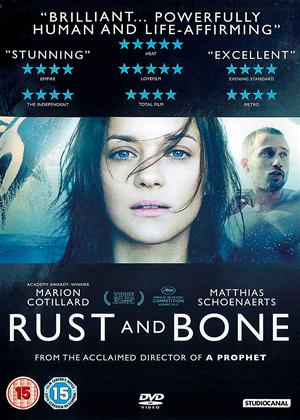 Reviews (6) of Rust and Bone

Ali a wanna be fighter is not a nice man, who views everybody who gets close to him as a pain, including his lovely little boy.

He meets Stephanie (Cotillard) in a nightclub where he breaks up a fight involving her through his role as a bouncer. Helping her home he leaves her his number, obviously attracted to her.

In the meantime Stephanie has an accident in work (she works at a Seaworld as a trainer of Killer whales), resulting in her having both her legs amputated below the knees. It is some months later that she contacts Ali and a relationship of sorts ensues. Ali does help her but he has no real feelings for her emotions and just offers sex when she wants it.

I think Marion Cottilard is one of the greatest actors alive today and seeing her cope with the tragedy, from total despair to slowly adjusting is a phenomenal performance from this huge talent.

Still gives me shivers - Rust and Bone review by BS

From the outset it is powerful, enthralling, deeply moving and impossibly French.

As a father of a young son myself, the complex, evolving, well considered relationship between the two male leads moved me to tears. To top it all, it was beautifully staged and shot. Awesome.

We found this hugely disappointing. Starting with .... It's in French ..... Please, please Cinema Paradiso, make this clear before you despatch movies.

We may not have given the movie long enough to be fair, but 20 mins in decided we'd rather jack it in than spend an evening with this.

Rewarding and brilliant performance - Rust and Bone review by GO

Well worth seeing if only for Cotillard's moving and extraordinary performance. And the relationship between Ali and his son is so well played.

I cannot understand why people are giving this movie 5 stars. Really. It's awful.

This is basically an attempt by French (and Belgian) state-funded cinema to make a film that may sell well overseas esp the USA> Cue the killer whales; cue the disability theme; cue the cute kid and social issues.

It is so dull and overlong. And I usually like foreign films and subtitles too.

The most impressive thing was probably the special effects - no spoilers but you'll see what I mean re the disability.

Fro a REALLY classy French film about disability watch THE DIVING BELL AND THE BUTTERFLY scripted by Brit stalwart screenwriter Ronald Harwood (who wrote THE PIANO and won the Oscar for it). Far better than the Spanish THE SEA INSIDE.

This is basically a very dull, overlong, gimmicky French film - though the man is actually Belgian, I just want to add and the movie is part funded by Belgian organisations too (ultimately the EU!).

A taste of ice water - Rust and Bone review by joannajuki

Jaques Audiard doesn't pussyfoot around the hard edge of French society. There is a repetitive onslaught of physical brutality. After a fight at a club, a beautiful girl gets injured and with a bloody nose. Ali, a struggling single dad, who acts as a bouncer there, kindly drops Stephanie home, and seeing that her boyfriend is jealous and none too gentle, leaves his number. When the girl is later mutilated and left disabled by her work at a seaworld show, she rings him a few months into recovery. Tough, encouraging, friendly but unromantic - he gradually draws her out of her shell of collapse and brings her to the sea, to swim and start on a road of emotional recovery. Meanwhile, Ali's career as a backstreet (illegal) fighter is progressing and Stephanie encourages him and starts to take on the role of agent. The acting is good, the relationships are believable, but hard as Hell. This is tough, impoverished life in France without gloss or sentiment.

Rust and Bone is a French language film starring Marion Cotillard that was nominated for the Palme D’or at last year’s Cannes film festival, as well as a host of other awards in the more recent BAFTA and Golden Globe Awards.

The film tells the story of Ali, a twenty-something father given full guardianship of his young son; moving with his son from Belgium to live with his sister and her family Ali struggles to hold down a job and dreams of being a kick boxer. During a temporary job as a bouncer at a nightclub he meets Stephanie, a woman who works at a sea life centre training killer whales. Shortly after their meeting Stephanie is involved in an accident whilst at work and wakes at hospital to discover her legs have been amputated, whilst Ali is finally given the chance to live out his dream in the kick boxing ring.

As ever however, things are not smooth sailing from this point on and although Stephanie’s friendship with Ali allows her to reach out from the darkness of her depression (eventually acquiring prosthetic legs and learning to walk again) Ali continues to seem afraid and distanced from the emotions that are growing between them.

Rust and Bone is another brilliant example of the sheer talent and gravitas that is Marion Cotillard, her role as Stephanie allows her to explore a vast range of personal identities as well as the tumultuous climates of love and depression. Prior to her accident Cotillard fills the screen with her sexuality, confidence and grace without a hint of the lewd or melodramatic overtones of many of her Hollywood counterparts; whilst after her accident, which is quite graphically detailed on screen, the sense of her loss of identity is almost palpable, her emotional pain epitomised by the absence of her legs.

Unfortunately for Cotillard Rust and Bone is simply one in what has been a long line of movies exploring the relationships between the disabled and non-disabled, though one at least takes comfort in the way in which director Jacques Audiard (A Prophet) refuses to succumb to the traditional sugary sweet veneer that glazed earlier movies like Forrest Gump. Ultimately however Rust and Bone is not really anything new, emotional, captivating, brilliant, Yes, butt original? No.