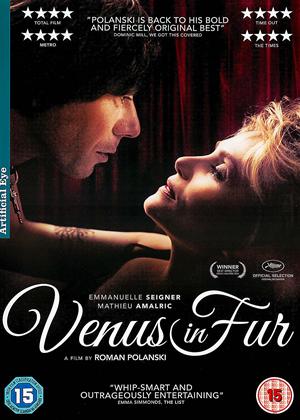 Synopsis:
After a day of auditions for the female lead in his new play, writer-director Thomas (Mathieu Amalric) hasn't found anyone suited to the role. As he is about to leave a brash, unschooled actress named Vanda (Emmanuelle Seigner) unexpectedly bursts in and Thomas reluctantly agrees to let her try out for the part. Within seconds he is stunned by her immediate transformation into a living apparition of his character. But as the likeness begins to appear to be much more than skin-deep and the extended audition builds momentum, Thomas moves from attraction to obsession...
Actors:
Emmanuelle Seigner, Mathieu Amalric
Directors:
Roman Polanski
Producers:
Robert Benmussa, Alain Sarde
Writers:
David Ives, Roman Polanski
Aka:
La Vénus à la fourrure
Studio:
Artificial Eye Film Company Ltd.
Genres:
Drama, Romance
Countries:
France, Drama, Romance

Reviews (1) of Venus in Fur

This is an immersive exercise in minimalism. There are only two actors throughout, and the only location is an abandoned theatre. The building is battered by an ongoing storm outside, which adds a layer of safe seclusion from the interference from the outside world.

Emmanuelle Seigner plays Vanda Jourdain, and Mathieu Amalric plays Thomas Novacheck. He is the director/adaptor of a play, and she is the ‘stupid c***’ who needs a job and persuades him she would be perfect for the lead role. At first, he understandably thinks she is a lunatic – eccentric certainly, confident but very scatty. And yet she insists he hear her read for the role. Instantly, her performance and personality win through and she becomes the dominant character. As she excels, Thomas diminishes. Even Roman Polanski’s direction visually elevates Vanda to tower over the director (Seigner is Polanski’s wife).

The only interruption into this burgeoning relationship is from the unseen Marie-Cecile, Thomas’s fiancée, who phones him asking when he will be coming home. This pin-prick in an otherwise weirdly evocative world-building seems to prevent, or at least delay, the main pair’s total immersion in each other. As to who Vanda actually is – well, she seems to be a lot more than just a struggling actress, but her true nature remains oblique.

The movie is based on the play "Venus in Fur" by David Ives, and moves the location from New York to Paris. The themes of domination are taken to frightening and, it seems, unresolved extremes. Whilst difficult to pinpoint the ultimate intent, ‘Venus in Fur’ is fascinating, the immersive nature of its narrative transcending the subtitles from its French origins.