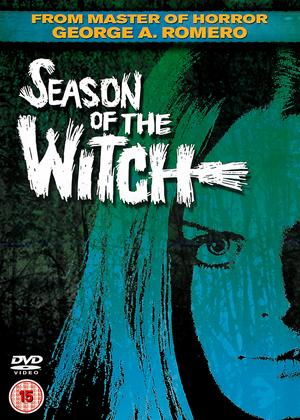 Reviews (2) of Season of the Witch

Joan Mitchell (Jan White) does quite a good job of playing the frustrated, bored but dutiful housewife with a secret, and the concept of a lady in such a position turning to witchcraft as a way out is not as far fetched as it may seem as woman will turn to religion for fulfilment where it is lacking. This film is just too dated however and is lacking in conviction. At one point Joan tells her boyfriend, "I knew that you would come around when I called you because I had asked the powers to bring it about" Yea, but you had also called him up and asked him around so let's not get too excited!

George Romero deserves full credit for doing his best not to become a one-note cliché. After inventing zombies as we now know them in his very first feature, his next two films were a romantic comedy, and this only marginally horrific feminist allegory. Unfortunately, "There's Always Vanilla" was a dismal flop even George Romero would prefer to forget, and "Season of the Witch" isn't much better.

The early seventies, that curious era when the drug-fueled idealism of the swinging sixties had fizzled out into selfish hedonism, everyone wore incredibly terrible clothes, and casual sexism was perfectly normal, are perhaps the only time in which this peculiar tale of a frustrated housewife who empowers herself in a very literal sense by taking up witchcraft could have been set. The trouble is, its most interesting element, the ambiguity as to whether the central character can actually perform magic or is just using the belief that she can as an excuse to misbehave, is handled very badly indeed. If you want to see how badly, compare the same director's later and greatly superior film "Martin", which involves a young man with a similarly ambiguous lifestyle: is he a centuries-old vampire, or just a very sick boy whose bizarre delusion is a weird excuse for being a serial killer?

The concept of women secretly having supernatural powers that allow them to get their own back on sexist males isn't a bad one ("The Witches of Eastwick" had a lot of fun with it), and neither is the idea that belief in magic is at least as important as whether or not it really works, but "The Wicker Man" this ain't! Apart from Jan White in the lead rôle, who comes fairly close to saving the movie but can't quite manage it, nobody acts well, and some of the cast don't seem to be acting at all. The only two men who matter are crudely unsympathetic stereotypes, too many of the women are shallow idiots, and everybody gets to ramble on in a strangely flat way for much, much too long. The direction is also extremely flat, except in a few nightmare scenes which prove conclusively that if George Romero isn't directing a very specific kind of horror film, he doesn't have the slightest idea what he's doing.

This is undoubtedly a very dated movie indeed, but that's not what makes it a bad movie. Other films were made in the same year that have stood the test of time, and unless a film is blatantly racist in a truly unacceptable way, we shouldn't blame the directors of old movies for not having clairvoyant powers that allow them to know what sort of content will be desirable many decades later. It's a bad movie because it's slow, boring, poorly directed, mostly very poorly acted indeed, and altogether feeble in ways that allow you to notice everything that's dated about it in ways that you wouldn't if the story was genuinely involving. And this story is often so uninvolving that at times I was paying less attention to what the characters were saying than how horrendous their wallpaper was.

On a technical note, it's not a very good print, though since it's an obscure and unloved film, I accept that this was the best print they could find. But I'm a little skeptical about the claim that it's been digitally restored, given the number of shots in which a very prominent hair is trapped in the camera on the left side of the screen. If something that obvious hasn't been digitally removed, what exactly have they bothered to do?