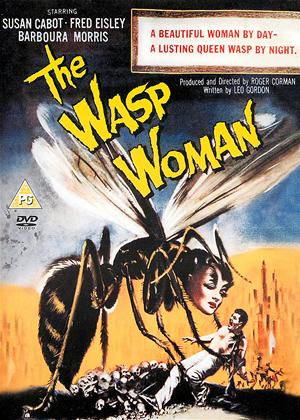 Sign up
Howling II: Your Sister Is a Werewolf

Reviews (1) of The Wasp Woman

Buzz off! - The Wasp Woman review by Count Otto Black

By far the best thing about this movie is its poster art. Many more people are familiar with that surreal image of a gigantic wasp with the face of a beautiful woman clutching a helpless little man with ambiguous intent than they are with the actual film. There's a very good reason for that. It's absolutely abysmal. By the way, the person who decides which movies belong in the "classic" category really ought to consult a dictionary, because if they think this movie is a classic, they obviously don't know what the word means!

Spoilers are irrelevant with this type of film, because most of them are written to a very predictable formula, and this is no exception. You're promised by the title that a woman will somehow become a wasp, so she does. Then she kills a few people because that's what monsters do, nearly but not quite kills the screaming girlfriend of the dull hero, and is defeated. The end, and not a moment too soon! As with most of Roger Corman's worst movies, the entire point of the film is to show us a monster which the budget was too small to portray convincingly, or even passably, so its appearance is delayed for as long as possible - in this case, for almost three-quarters of the movie. And while we're waiting with growing impatience for something to actually happen, the characters tread water while trying to inject some tiny shred of suspense into the build-up to an event which is the only thing in the movie we're the least bit interested in.

To say the wasp woman isn't quite as impressive as the promotional artwork implies is even more of an understatement than usual. Corman's posters nearly always promised us a far bigger monster than the one we got, but here he outdoes himself by giving us a wasp woman who is the exact opposite of what the poster led us to expect! Instead of a giant wasp with a woman's face, what, after nearly an hour of boredom, we finally get to see is a normal-sized woman wearing a mask that looks like something children would make for a rather peculiar school play. It's shown as briefly as they can get away with, and is deliberately out of focus some of the time, but its inadequacy is still woefully apparent.

And the worst thing of all is that none of this is even laughable. Ed Wood might have gotten away with it because he would have been doing the best he could, and his enthusiasm would have shone through the ramshackle, threadbare mess, but Corman simply doesn't care. Draw the suckers in with a misleading poster, and if they hate the film, so what? They've already paid, and that's what matters. This is zero-budget exploitation cinema of the laziest kind, shot through with cynical contempt for its target audience. By today's standards it's unbelievably sexist, but even if you take into account that it was made almost six decades ago and forget about political correctness, it's still boring as well as inept, and that's unforgivable!

Oh, and the cherry on the top of your dismal viewing experience is that this is a lousy print. The visuals, though somewhat grainy, aren't too bad. But the entire soundtrack has degraded to the point where it sounds as though it was recorded through a drainpipe.