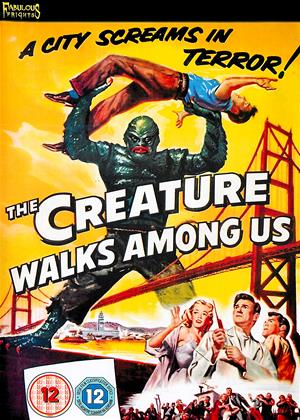 Rent other films like The Creature Walks Among Us

Reviews (1) of The Creature Walks Among Us

Spoilers follow ... - The Creature Walks Among Us review by NP

The Creature from the Black Lagoon is often thought of as the last Universal classic monster. As far as this, the final of three films to star the titular ‘gill man’, the difference from the Lugosi/Karloff/Chaney monster mashes is marked. No familiar orchestral soundtracks cribbed from earlier horrors; a sun-kissed Honolulu main road (which opens this) is a million miles away from the faux ‘European’ locations on Universal’s backlot that provided a staple part of earlier monster movies. Of course, in the late 1950’s, times and styles have changed. Sleek haired, square jawed wholesome heroes are a kind of progression from familiar quick-talking reporters or clipped police officers. And what a dull bunch they initially appear to be. An early conversation where they speculate about man exploring outer space is an ideal time to go and put the kettle on. One cries out for a Lionel Atwill, or even a Skelton Knaggs to breathe some life into the proceedings.

Typical audacity is displayed by the humans, who not only capture the creature from its natural habitat, but then subject it to an operation to give it a more human aspect. Perhaps it could become a jealous neurotic like Jeff Morrow (Dr William Barton), or his wife Leigh Snowden (Marcia Barton) who is trapped in an unhappy marriage? It is an interesting conundrum for the audience. These respectable progressive heroes are noticeably flawed for a change.

The creature is used to excellent effect here. A Frankenstein-like pathos accompanies its attempts to come to terms with its enforced condition. The make-up, by Bud Westmore (who appears to be the only link between this and Universal’s ‘classic monster series), is also very impressive, ridding the creature of the wide-eyed cuteness he previously possessed, instead imbuing him with a naturalism that belies the man-in-costume realisation. It is played by a (bizarrely) uncredited Don Megowan, who – amongst many other things – went on to play Frankenstein’s Monster in an abortive pilot for Hammer’s TV show ‘Tales of Frankenstein’ two years later.