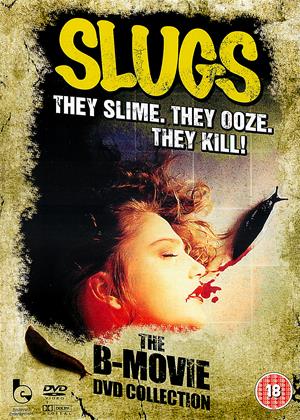 I was watching the very poor 'Slither' a while ago which features slug-like creatures and I remembered a book by the British author Shaun Hutson called 'Slugs' and wondered if that had been filmed. Well it has, way back in 1988, the only one of his books to be filmed, so here I am watching it. And it is - of course - poor.

Shaun Hutson (aka 'the godfather of gore') is a prolific author of around 60 books including under a number of pseudonyms, mostly in the horror genre. Designed for a fast read, the prose is pithy and definitely non-intellectual, and there's always plenty of gore and gruesome imagery with a couple of explicit sex scenes thrown in for good measure. Apart from horror he has written a number of war books and even the novelisation of the excellent film 'The Terminator'. One of his first books was 'Slugs' and there's also a sequel, 'Breeding Ground'. Of its genre, it's escapist popular fiction, although British horror fiction books seem to be thin on the ground nowadays after the death of Frank Herbert.

The film of 'Slugs' has been shifted to the USA and filmed by a Spanish director and includes several Spanish actors whose lines are badly dubbed into English. The slugs themselves are slow-moving and not at all scary, so as a horror movie frankly it's a failure. There is a fair bit of gore, but the film is so badly scripted and the acting so wooden as to be embarrassing.

Apart from the setting, the film follows the book moderately closely - it just doesn't get 'under the skin' as it were in the same way as the book. It's poor, but isn't bad enough to make the 'so bad it's good' category.

I'll give it 2/5 stars, because I have seen even worse - and that includes the truly awful 'Slither'. A poor creature feature it may be, but it's miles better than that awful dross.

I worked in a video rental outlet through the whole of the 80's and was (and still am) a big horror movie buff. Slugs was one of a handful of films that slipped through the net which I never got round seeing. 30 years later I finally got round to seeing it. Was it worth it!!! Hell yes. It's a great little creature feature B movie with great gore FX and it manages to entertain throughout. Perfect late Friday night viewing.