Rent The Thing from Another World (1951) 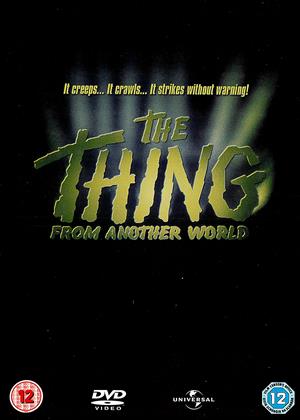 Reviews (1) of The Thing from Another World

Sci-fi classic. - The Thing from Another World review by Steve

After editing Red River for Howard Hawks, Nyby got the job of directing this proto-alien invasion classic. But  Hawks produced, and this is a Hawksian film. The first fifty minutes of The Thing... are given over to the exposition of a Hawksian world. Scientists and military personnel are camped out in the Arctic Circle. They are a group of professionals who express themselves in tough, fast crosstalk. There's even a fast talking dame, Margaret Sheridan, doing a fabulous impression of Lauren Bacall.

This long introduction is fairly entertaining, but the film only really comes to life when the alien (played by the imposing James Arness) defrosts and reanimates. The last half an hour is thrilling and glorious. The alien is nominally humanoid, but analysis proves that it is actually intelligent vegetation who feeds on the blood of mammals. It is more intelligent than us and reproduces with frightening rapidity...

It is tremendous to watch the laws of fifties sci-fi being invented before our eyes. The alien that is brought back to life through human error. The attempt to confront the invasion with science. The megalomaniac boffin who foolishly aids the creature because of its value to science. Arness has a fine presence as the first alien monster of the fifties, with its strange luminous aura and thorny skin.

There's an excellent, witty script from screwball specialist Charles Lederer, and an all time great action score from Dimitri Tiomkin. The fifties science fiction wave starts here at the North Pole. At the end of the film, the dome headed newspaper reporter Scotty (Douglas Spencer) shouts his article down the phone line to his editor: 'Watch the skies, everywhere! Keep looking. Keep watching the skies!'.