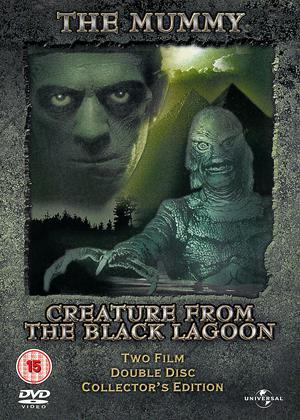 Synopsis:
Boris Karloff's legendary performance has become a landmark in the annals of screen history. As the mummy, Im-Ho-Tep, he is accidentally revived after 3,700 years by a team of British archaeologists. It is revealed in a flashback that he was a high priest, embalmed alive for trying to revive the vestal virgin whom he loved, after she had been sacrificed. Alive again, he sets out to find his lost love. Today, over 50 years after The Mummy was first released, this brooding dream-like film remains a masterpiece not only of the genre, but for all time.
Actors:
Boris Karloff, Zita Johann, David Manners, Arthur Byron, Edward Van Sloan, Bramwell Fletcher, Noble Johnson, Kathryn Byron, Leonard Mudie, James Crane, Henry Victor, Florence Britton, Bill Elliott, Leyland Hodgson, Eddie Kane, Tony Marlow, C. Montague Shaw, Pat Somerset, Arthur Tovey
Directors:
Karl Freund
Producers:
Carl Laemmle Jr
Writers:
Nina Wilcox Putnam, Richard Schayer
Studio:
Universal Pictures
Genres:
Classics, Horror

Reviews (1) of The Mummy

Spoilers ... - The Mummy review by NP

Originally known as ‘Cagliostro’, the subsequent tweaking of the script and title (and scant minutes that actually feature a traditionally bandage enwrapped mummy) ensured that this would quickly join ‘Dracula’ and ‘Frankenstein’ (both 1931) as one of the most iconic (that over-used word) horror films of all time.

Reviewers have noted this could be seen as a re-write of ‘Dracula’, and stars two of that film’s players (Edward Van Sloan and David Manners). The former film’s use of ‘Swan Lake’ as opening music is also re-used here. The inclusion of ‘Frankenstein’ Boris Karloff further compounds Universal Films’ impressive growing repertoire company of the time.

Bramwell Fletcher plays Ralph Norton, the hapless explorer who foolishly resurrects the mummy from his long slumber, and his crazed hysterical laughter as he (but not the audience) witnesses Imhotep talking ‘a little walk.’ Another classic horror moment.

As far as the mummy is concerned, that is all we see – a flickering eyelid, twitching fingers and a reaching hand, and finally two long bandage trails signifying the departing wizened creature. These frightening moments are accompanied by no musical score whatsoever, which heightens the isolated nightmare.

Karloff is seen from that moment onwards – ten years after his reawakening - as Ardath Bay (an anagram of Death by Ra, I recently discovered, 84 years after the film’s release), literally a living mummy. Face and hands leathered and broken (an arduous make-up by resident genius Jack Pierce), Karloff does indeed look and move like a reanimated cadaver. It is a wonderful, restrained performance. Even his eyes lack any lustre until the very end, just before the character meets his doom.

For such a slow moving, unspectacular film, things could become a little dull. Luckily the heroine Helen Grosvener is played by Zita Johann who is lively and headstrong (and apparently had a less than joyful time filming, feeling she was a ‘scapegoat’ for Director Karl Freund). Certainly she gives more of a performance - even when Grosvenor is possessed by Bey - than David Manners who, like his turn in ‘Dracula’, is charming but stodgy - (indeed, between her two would-be suitors, Grosvenor might find Bey has more life in him!).

‘The Mummy’ stands shoulder-to-shoulder within its mighty triumvirate and has gone onto inspire generations of horror films. Fans might be disappointed that it wasn’t until the first sequel (‘The Mummy’s Hand’ 1940) that we become more familiar with the traditional looking pharaoh, and this is a very slow film, very of its time. And yet it contains a creeping sense of dread, an overwhelming atmosphere of reincarnated, ancient horror that any sequels or remakes could never quite emulate.