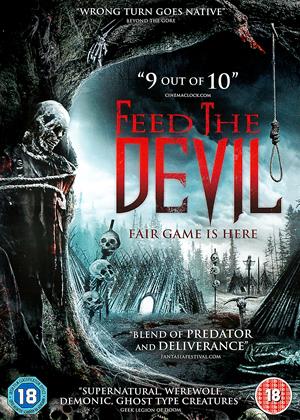 Reviews (1) of Feed the Devil

A nasty piece of work - and that's just the central character. Mild spoilers ... - Feed the Devil review by NP

If you are taking a trip to the snowy forests of Alaska, or indeed anywhere at all, then this film's lead Marcus (Jared Cohn) possesses every trait you would be wise to leave at home. I'm no prude, but every sentence simply has to be littered with the f-word, every word has to be squealed out in the most petulant way possible, and every overtly aggressive gesture is just begging for the little weasel to receive the best kicking available. His sister and her friend, not hugely appealing themselves, have my every sympathy for having to spend time with this absolute tool, as he searches for marijuana plants. That's right, he is an excessive weed smoker, and that may be the reason he is portrayed in this manner. Rather than being stoned and laid back, he is forever in the midst of a temper tantrum as he travels to locate more marijuana. Don't do drugs, kids - is that the message - or you'll become a boorish loudmouth like Marcus? Have I said enough to convey how appalling this character is? To be honest, I doubt it. I'm not sure any one character has tempted me to turn off a film before, at least not for a long time. Only the nicely filmed locations, occasionally spooky isolated atmosphere, and the furious hope that I'll see Marcus suffer stop me giving up on this.

There are some moments of gore, or more specifically, meat. There are also some nicely shot moments of jeopardy for our leading man who, after carelessly losing his co-travellers and has no-one to talk to, does us the favour of keeping his gob shut. Overwhelmingly, though, this is a choppy, curiously edited film. Things happen, events occur, nothing moves forward. And then suddenly, it ends. The storyline, which is not unlike Adam Nevill's 'The Ritual' in places, doesn't really pick up momentum. I admire director and co-writer Max Perrier for appearing to try something different with his approach to this (and the excellent score by Miksa Kovek adds further layers to the horror), but his abhorrent main character tests the patience, and the rest of the production isn't consistent enough to make amends for that.