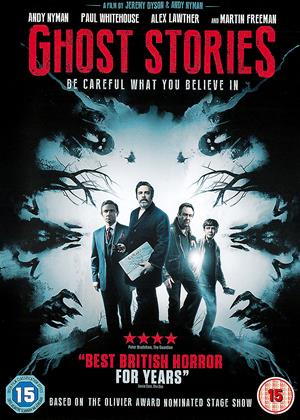 I loved this film - which is based on a stage play, which shows in the clever structure and twists.

Andy Newman comes from a magic production background - he produces many of Derren Brown's stage shows - and Jeremy Dyson who cowrote/produced this with Newman, comes from The League of Gentlemen, so that's a class double act to start with.

Three short stories about spooky goings-on are linked by common threads (no spoilers) and, whilst the increasing tricksiness may pose more questions than it answers and irritate, it keeps the film well-paced and entertaining until the very end.

Paul Whitehouse plays, well, Paul Whitehouse doing his cockney act though makes it more mental than on The Fast Show or his own TV show; Martin Freeman is brilliant as a posho city boy - in fact, he's so convincing that at first I didn't recognise him - his impression is spot-on of that type of person. The middle tale of a teenager is also entertaining.

I do so hope more of these modern portmanteau horror movies get made - I loved the old Hammer horror ones, often featuring Peter Cushing and people like Roy Castle and even Boris Karloff (British Universal horror veteran William Pratt). The first was perhaps the brilliant Dead of Night (1945) which was remade in the early 70s - the ventriloquist doll sequence of the first movie is classic. But also Dr Terror's House of Horror, Torture Garden, Tales from the Crypt, Asylum etc. They died out (pardon the pun) as Hammer went under in the 80s, which is a shame - though TV replaced horror movies really. Now they live again. HOORAH!

These portmanteau films always have a twist at the end which links all the stories, so keep your wits about you during the film as the ending will make more sense then (no spoilers).

I could watch this all over again. Brilliant entertainment and genuinely spooky with some frights and jumps along the way, though the stories are based on old horror tropes such as the haunted house/asylum, a broken-down car, spooky woods, ghostly children etc.

I watched this film the way ghost films are meant to be watched, which is alone, late at night and in the dark, and it scared me rigid. I thought I was going to have to turn it off several times. The last film to do that to me was The Orphanage.

The film's moody atmosphere must be due in part to being shot entirely on location in Yorkshire, and I recognised a local pub in one short exterior shot.

I did find the ending a bit disappointing, which is why it only gets four stars. It is based on a stage play, and the ending probably worked better on the stage.

But all in all, a great slice of spooky entertainment for ghost film lovers.

Okay, I get it. It's difficult being original. And it's even harder in a genre like horror. But still...

I won't include the obvious spoilers, the main one lifted from a famous 1990s crime/heist movie. And if you know Silence of the Lambs well, you'll even hear snippets of dialogue from that movie in Ghost Stories - not as quotes but as, well, dialogue.

So why is this even worth watching? Two reasons: one is its creepy, oppressive atmosphere, beautifully realised by its Director of Photography. When a working men's club appears as a setting it's like you can *smell* the place and I can't recall a movie doing this so well for quite a while. [Actually, I can: the glacially slow but utterly terrifying Italian horror, 'Across the River']

Second reason is a remarkable performance from Alex Lawther, who pretty well steals the movie.

Overall: if you know your movies, prepare to be a bit annoyed. But if you can make a bet on Lawther winning a Oscar one day, you'll eventually win your Cinema Paradiso subscription money back.

This is a rich, fruity, beautifully made British horror film directed, written by and starring Andy Nyman as Philip Goodman (co-director Jeremy Dyson has an uncredited cameo as a DJ). Goodman is a solitary investigator committed to debunking the ‘myth’ of the paranormal. After meeting his hero, former paranormal investigator Charles Cameron (a deeply unpleasant individual reduced and ill, living in squalor) he is offered three cases and challenged to investigate them. Thus we are supplied with the trilogy of tales in this anthology.

Paul Whitehouse plays Tony Matthews, night watchman, haunted by something nasty in an empty warehouse. Alex Lawthur is Simon Rifkind, a teenager who stumbles across a rattled demon whilst driving through woodland. Mike Priddle, played by Martin Freeman, brings the trilogy to a close troubled by a poltergeist whilst waiting for his son to be born.

Of course, things are rarely as they seem, and it is only after these stories are told that things become really weird, and there’s a pleasing smattering of MR James-inspired moments. It is possible that the dénouement might be seen by some as disappointing, but the slow-burning lead-up to that moment is very effective.

The ending linking the stories together wasn't very satisfactory, but this film was watchable if only to see what exactly was happening. Not sure I would recommend though, as it's not frightening in any way.

I don't share the general enthusiasm for this picture. Perhaps I shouldn't have watched the extras, which I found irritatingly self-congatulatory.

It struck me as a film made by friends, who had found three good locations for (rather cliched) ghost story sequences and then tried to spin a story across them. I didn't find it very scary, and I didn't understand the ending (though my younger son sort-of explained it to me). Some good sound and visual effects, not much more.

Things go bump in the night. 'It's behind you' kids etc. Based on a stage play you won't have heard of because it probably wasn't much good. Neither is this film. Badly connected tales of ghosts and things of the forest, it attempts to make sense of itself at the end but only succeeds in being irrelevent and makes the preceeding events redundent in meaning.

Not up to the job of intelligent horror and not messy enough to be a really horrific experience.