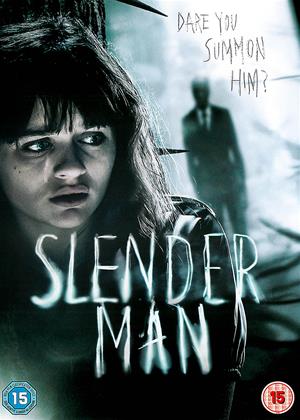 Predictable and Boring and just WHY ?

4 very stupid girls summon the Slenderman during a sleepover , then each of them denies seeing him everywhere they go during the day and in their sleep at night to one another , so as usual they all indepenently think they are going mad or just imagining stuff and are totally ignoring people going missing all around themas being linked to it at all even though they are constantly being told it is what is happening .Why are Teens in these films always Soo Damn stupid ? Anyway ...that is all that happens . 4 stupid girls and a boogie man .yawwwnfest

I did not enjoy this film at all. The filming was too dark and for me there was no conclusive ending just a lot of time wasted watching it.

Apart from a few impressively creepy images on the internet, I was unfamiliar with the idea and concept of ‘the Slender Man’. To quote Wikipedia, ‘The Slender Man (also known as Slenderman) is a fictional supernatural character that originated as a creepypasta Internet meme created by Something Awful forums user Eric Knudsen (also known as "Victor Surge") in 2009. He is depicted as a thin, unnaturally tall humanoid with a featureless head and face and wearing a black suit.’ I’m still not sure I’m any the wiser!

This then, is the film based around the character. And sadly, despite the efforts of a young cast saddled with irritating dialogue centred around writer David Birke’s idea of teen dilemmas (affairs of the heart, usually), this is a fairly half-hearted affair. It owes some of its ideas to the central concept of ‘The Ring (1999)’ and employs much use of mobile phones to communicate events. The title character looks good, but is really just another ‘bogeyman’ whose function it is to traumatise flirting adolescents and administer death by CGI. With such a potentially creepy central character, I’m not sure this is the best use of his talents.

My favourite character is Wren. Actress Joey Taylor transcends the triteness of some of her dialogue and emerges as not only the most likeable lass of the bunch, but someone you actually do not wish to see fall victim of the machinations of the Slender Man. Director Sylvain White cloaks most scenes in an effective, sinister cold shadow and the ambient score by Ramin Djawadi and Brandon Campbell does its best to sustain the atmosphere. Ultimately however, ‘Slender Man’ is disappointingly dull.

I found this film completely pointless with no real plot and very predictable scenes. No closure and it was frustrating that the characters couldn’t fight back against Slender Man.