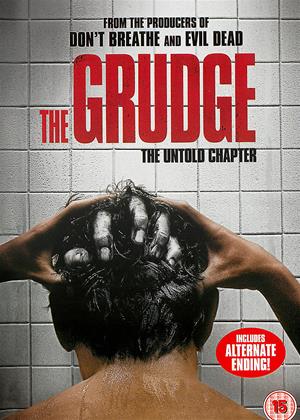 Reviews of The Grudge

The Grudge (aka The Grudge: The Untold Chapter) review by Mark McPherson - Cinema Paradiso

Reviving a horror franchise like The Grudge would seem like an open season for a strong revision. The premise that made the original Japanese horror film inspirational enough for an American remake was easy enough to see. It’s a standard haunted house premise that relies almost entirely on its atmosphere. In the past few years, a number of entertaining horror films have gotten by on this aspect alone. So perhaps it was worth digging up The Grudge for such a remake. However, this film had apparently been in development for so long, trying to dig out something new from this old franchise, that the film seems to have tired itself out just trying to get back into the Grudge groove. After nearly a decade in development, what we’re left with a diced up horror film that might’ve been good but only ends up being a patchwork of what might’ve been a decent remake.

The film centers around the killings inside one particular house, trying to take over the case from his former partner. Anyone who enters the house soon comes under a supernatural curse. Given the curse’s somewhat unexplained rules, it expands towards all sorts of people. It mostly seems to befall couples which could’ve made for some unique commentary on relationships amid some evil forces befalling their lives.

I know I probably shouldn’t set such unreasonable expectations for a horror film such as this. You critique the movie you got. What I got, however, was just a slathering of snooze-worthy scares. The film is told similar to the past Grudge pictures in a non-linear fashion. And that’s fine. Heck, it’d even be great if the film finely chose its assembly to an all-encompassing ensemble picture of one curse affecting many lives. Such an anthology is intriguing. But the ghastly frights and stories surrounding them are never thrilling, even if we’re approaching this film more for the thrill of anticipation than the sights of ghosts.

What I absolutely cannot forgive the film for is the misuse of such a great cast. The likes of Andrea Riseborough, John Cho, and Lin Shaye are all strong actors that have a history of proving themselves to be standouts of the horror genre. But here they are in a film that does them no service. Their performances are exceptionally weak at selling the terror of it all, slipping into a subtleness too tiring to ever be all that interested in whether these characters will make it out alive or not.

But perhaps the biggest sin of the picture is the editing. With so much jumping around, it can be easy enough to lose sight of the characters and even lack sympathies for them as we don’t get to spend much time with them to care. And it’s very clear there’s a lot left on the editing room floor given how it seems that huge hunks of story are chopped out to meet the running time, sure to leave the audience scratching their heads in confusion.

Similar to the likes of the Ring remake, the forgettable Rings, there’s little reason The Grudge offers with its 2020 remake to be any more relevant. A mixture of story meddling and sloppy editing only make the case for how corporate-constructed horror is a more restrictive and uninspired venture. But I think one thing is quite clear from such a film; The Grudge would work far better as an anthology television series and not a film that tries to smush together a whole bunch of ho-hum horror stories into one big snooze-fest.