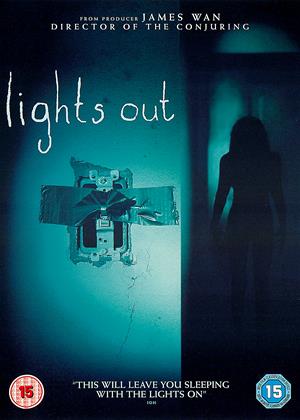 Synopsis:
Growing up, Rebecca (Teresa Palmer) never knew what lay behind the terror lurking in the dark. When she left home, she thought she'd also left her fears behind. Now her little brother, Martin (Gabriel Bateman), is experiencing the same unexplained and terrifying events that once tested her sanity. A supernatural entity with a connection to their mother's past is haunting them, and as Rebecca gets closer to discovering the truth, her life and the lives of those around her are in danger... once the lights go out.
Actors:
Teresa Palmer, Gabriel Bateman, Maria Bello, Alexander DiPersia, Billy Burke, Alicia Vela-Bailey, Andi Osho, Rolando Boyce, Maria Russell, Elizabeth Pan, Lotta Losten, Amiah Miller, Ava Cantrell, Emily Alyn Lind, Ariel Dupin
Directors:
David F. Sandberg
Producers:
Lawrence Grey, Eric Heisserer, James Wan
Writers:
Eric Heisserer, David F. Sandberg
Studio:
Warner
Genres:
Horror, Thrillers

Reviews (5) of Lights Out

Scary when the lights go out - Lights Out review by porky

I found this a Good scary movie.... In the same kind of vein as Insidious , a Scary Other entity is lurking when the lights go out. Scratchy fingers and Moving Shadows raises the goose pimples ,especially when you watch it alone in the dark with a Dog that barks at everything .and a Cat that stares at the doorway as if someone were there !!!

Yes its Creepy, Cant say the characters were not annoying ,but Most are these days ,especially in Horror movies , they do all the stupidest things you just feel they deserve to die after doing that . well pretty much the same here . people never Do what they should or tell the right people what is wrong etc.... but then maybe if they did Horror movies just wouldn't exist .

Well worth a watch if ' Insidious' or 'The Conjuring' were your fave Horror movies of recent times.

A good scary story with a good ending which other ghost/horror films are seriously lacking these days. Well acted by everyone involved. Enough gore for people who like it and not too much for people that don't.

A good, but not a great horror film, but definitely worth a rent. Lots of "jumpy" bits. Watch in the dark!

This exceptional, unpretentious chiller wastes no time in putting the wind up the audience. Here are creatures that exist in shadow, but disappear in the light – a terrific concept for jump scares, and is an idea that has been used in various guises over the years (not least in the form of The Weeping Angels in Doctor Who). Wayward goth Rebecca (Teresa Palmer) is taking care of her little step brother Martin (Gabriel Bateman) , whose father has been killed (in an effective opening scene); his mother Sophie (Maria Bello) has seemingly gone mad, talking to a shadowy entity called Diana. Between them, and boyfriend Bret (Alicia Vela-Bailey), they aim to get to the bottom of this shady business.

The use of jump-scares has reached epidemic proportions in horror films recently, coupled with a crescendo screeching of soundtrack violins, and is in danger of wringing itself dry through over-use. But here, the whole concept is a series of such scares – you know they’re coming but you don’t know when; and they are the fabric of the story. And they are very effective.

Director David F. Sandberg has based this on his own 2013 short of the same name. I have not seen this, but it has been critically acclaimed. This expanded version doesn’t feel padded in any way, the extra time possibly being given over to brief explanations of Diana’s original story, and fleshing out of the characters, all of which are extremely well played (and cast). Also, for a film which *might* uncharitably be dismissed as a succession of ‘boo!’ moments, the tension builds throughout with no real feeling of repetition. There is emotion here, too, without ever becoming syrupy. Deservedly, ‘Lights Out’ proved to be a commercial and critical success upon its release.

The darkness is the most simplistic elements of terror. The belief that some unknown force waiting in the shadows to snatch us away is enough to make anyone pine for a night-light. Lights Out is a solid example of a horror picture that knows how to use the darkness correctly. The filmmakers knew how to make the dark a cinematic character, a terrifying presence and craft a clever monster within the black.

The movie is based on a short film by David Sandberg in which someone flicks the lights in a room on and off. A strange figure appears each time the light are off and grows closer towards its victim with each flick. It’s not exactly the most original of concepts in how you may have seen something similar in Darkness Falls or Sinister 2, but Sandberg thankfully doesn’t rely on this trick. He begins his movie with this bit inside a warehouse where a fearful employee is smart enough to leave promptly after witnessing the stranger in the dark. The unfortunate boss of the warehouse is the last one out and the first victim of this darkness-bound stranger that slashes up her victims.

The death of this man leaves his family in ruins. His wife Sophie is a mental mess, his step-daughter Rebecca has moved out to pursue her own rock-n-roll lifestyle and his young son Martin endures the scary female stranger that still lurks in the shadows. As Martin has trouble sleeping at home with his unstable mother, he seeks sanctuary with Rebecca. Despite Rebecca appearing distant from her family, a maternal instinct kicks in with Martin that she drops her eager-to-shack-up boyfriend and pot smoking to take care of her little brother. Determined to fix the situation, Rebecca investigates Sophie’s house to figure out what is her problem that’s preventing Martin from sleeping at night.

Rebecca eventually discovers the family secret of the spooky figure known as Diana, a being that has stalked her family since Sophie’s childhood. While her story isn’t all that original, it’s clever enough and divulged early in the picture so we don’t have to endure the reveal. The movie plays a little fast and loose with its own rules in trying to define how Diana appears, when she appears and what can hurt her. Still, I enjoyed the tension created whenever Diana makes her presence known. If you turn on all the lights, she cuts off the power. If you think you’re safe in the daytime, she’ll pull you under the darkness of your bed. Even when outside, she can attack from the shadows of an underpass. Using any source of light can halt her in her tracks which leads to some unique uses of smartphones, guns and headlights. Black-lights can apparently harm her more for some unexplained reason. There probably was some explanation in all the files Rebecca uncovers, but it’s not worth more exposition.

While Diana is a sufficient figure built for scares, I dug Sandberg taking equal parts time to develop the characters. Without the supernatural baddie, Lights Out still works surprisingly well with its own level of family drama. Removing Diana from the equation, there’s a true sense of family coming together for the sake of Martin’s safety and Sophie’s well-being. Having established all of this makes the third act spookfest of Diana terrorizing her victims inside a house all the more tense and engaging.

Lights Out doesn’t exactly redefine the horror aspect of scary creatures hiding in your closet, but it is presented with enough character and cleverness to be a satisfying bit of horror, perfect for watching with the lights off. The meeker viewers will cower at the frights while the horror buffs will chuckle at the anticipation. Just don’t get carried away with flicking the lights on and off to check for monsters as too much of that will break a fuse.