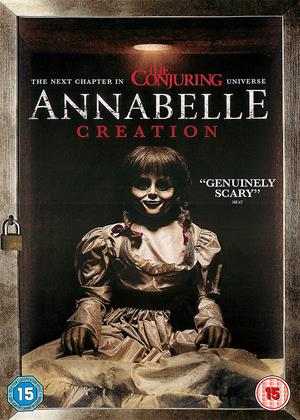 Not a complete disaster... - Annabelle: Creation review by RW

Let's be honest, possessed doll/things that go bump in the night movies have been done several times before so expectations here should be set to low. And to be fair, doing so probably helps because this does edge itself a little higher up the list than some others (Childs Play 2 onwards I'm looking at you!).

I bypassed the previous film and went straight for this "prequel" which is generally better received, and whilst it does all fall apart a bit in the third act it did hold my interest in its initial set-up with some impressive visual flourishes in places.

The denouement sadly doesn't quite pay off and whilst it does rely heavily on jump scares for its "horror" the sound design is particularly effective, in fact If you are going to watch it make sure you do so through a decent 5.1 surround system, it will make a big difference to your enjoyment.

A major problem with 2014’s Annabelle was that the doll itself is not that creepy. It can’t move on its own as it requires a lame looking ghost to carry it around a house and terrorize its victims. The prequel film Annabelle: Creation attempts to improve the concept by making everything around the doll more terrifying. Gone is the ghost in a nightgown, replaced with a beastly demon that lurks in the shadows with nasty teeth and glow-in-the-dark eyes. Gone are the frights of the doll being somewhere and then reappearing somewhere else. Gone are most of the simplistic scares of falling books and invisible pushing, replaced by more visible and frightening visions of demons. Even Annabelle looks more believable as a doll that kids would actually play as opposed to the hot mess she was in the first film.

The prequel reveals that the Annabelle doll was created by Mr. Mullins, a toymaker that based the design of the doll off his little girl. Everything seems to be going smooth in his rural. So, naturally, his daughter must be taken away from him in a horrific car accident. Mr. and Mrs. Mullins are saddened by the loss of their daughter and naturally accept a deal with the devil to see their little girl once more in the house, somewhat contained within the vessel of the Annabelle doll. It’s just too bad it’s not really their little girl and in actuality a demon that will soon murder everyone in the house. They decide to ground her within a dark closet of wallpaper must up of passage of the Holy Bible. Now why didn’t the priests in the exorcist think of that?

It may sound as though I’m spoiling too much of the plot here, but, trust me, this is the least interesting part of this story. It’s not until the Mullins take in an orphanage of young girls that the haunted house frights become a fun ride to experience. It seems like a very stupid call on the part of the Mullins to house little girls and tell them to stay out of their dead daughter’s room with so many toys to play with. Right on schedule, one of the girls will venture inside, unwittingly unleash Annabelle and the house’s spooky mode is activated!

The scares are technically lovable. There’s a great use of glow-in-the-dark eyes, creeping shadows and footsteps in the darkness to set the mood. True, there are jump scares here and there are a few that are non-scares where characters greet each other by jolting them out of silence, but there are some clever jumps here as well. A perfect example is when one of the girls is led up the stairs where they previously saw the evil ghost of Annabelle that wants their soul. Which direction is the ghost going to come from? The top of the stairs or at the bottom the stairs? She could be under the steps as it was previously established anyone could wedge underneath. But, no, it’s from above! Scenes like this are not particularly scary, but damned if they are not a hoot.

I was also surprised how much I liked the characters for as many classic horror mistakes as they make. Talitha Bateman plays Janice, an orphan stricken with polio that desperately wants to improve and play with the other girls. A demon could tempt her with being able to walk again. That is, if the demon gave her a choice. Janice’s best friend is Linda, a chipper and wise little girl played expertly by Lulu Wilson. She’s the most intelligent of the lot as goes directly for a gun with she senses a ghost and has to shout for the adults to run when she hears the rumblings on the demonic. The adults of Stephanie Sigman as Sister Charlotte, Anthony LaPaglia as Mr. Mullins and Miranda Otto as Mrs. Mullins are sufficient enough, but more intriguing for their purposes than their characters. In particular, Ms. Mullins is a uniquely mysterious woman hidden in the curtains of her bedroom where she wears a mask to hide her disfigured face.

Annabelle: Creation doesn’t change my stance on the theory that dolls are not scary, but it did give me some thrills and laughs for its audacity of rollercoaster horror picture. There’s some great atmosphere, likable characters and some surprisingly quality kills to earn that R rating. I also appreciated the big twist in the full-circle ending that reveals the real Annabelle doll of a Raggedy Anne. Who knows what crazy Annabelle sequel could be concocted from some such a development.