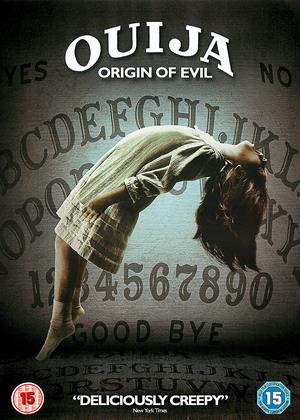 Reviews (4) of Ouija: Origin of Evil

similar to the first but still good - Ouija: Origin of Evil review by gazmb

The usual group of friends messing with the unknown that probably should be left alone. One girl in the group says she can contact the other side , the others didn't believe her . once you bring them through can you get them to go. More of the same like in the first Quija film but I still enjoyed it . Still find it creepy and the story was okay.

dont waste your time with this movie it should be a comedy! this has to be the worst horror movie ive seen in a long time,in fact i couldnt even watch it till the end before turning it off,terrible!

A Much Better Movie than the First Ouija Movie....

This is the Prequel set in the 1960's to that previously in Modern Day ,

Its telling the story of the Dead Girl who's lips they cut open when her Dead Body is discovered behind the false wall...

Much Darker Movie than the First , Closer to something like 'Insidious ' than the Teen Slasher the First one was.

I almost didnt bother watching this Movie after seeing the First one and being rather Disappointed , but its made me think i might now watch the Third Movie now, as this was entertaining enough for even a second watch .

Respectable horror with a few scares. - Ouija: Origin of Evil review by NP

Watching this prequel to the 2014 original puts me in mind of horror stories for the Disney generation. That is no criticism – the acting here is fine, and it is always a relief to find that the child performers are not at all like the petulant brats often found in these types of film. Perhaps children were better behaved in the 1960s, when this is set. Lulu Wilson is particularly good in her role of young Doris, youngest of the Zander family, a role for which she has rightly received much praise.

This is an entirely respectable production. There are a few creepy moments, but little that will thrill you beyond the few moments they are on screen. The period atmosphere is conveyed well, and although this leads directly into the following film, it is fairly enjoyable in its own right.

As with any family-friendly horror – and there is nothing here to unreasonably shock the viewer – it doesn’t go beyond superficial, which is fine. A couple of gory moments towards the end will make the younger viewers wince a little, but beyond that, it is undemanding stuff. My score is 6 out of 10.