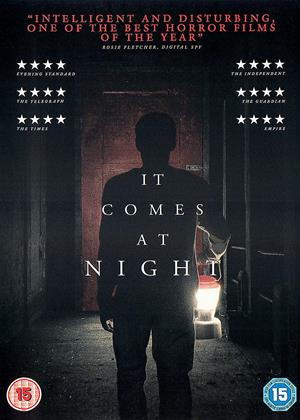 Reviews (8) of It Comes at Night

Yes, but what was It? - It Comes at Night review by GR

I think that film titles can be very misleading in a bid to capture a wider audience. Hard to argue against that, but in this case it was a misnomer for what was otherwise a passable psychological thriller set in the near-future of an unspoken apocalypse. Ok, as long as you don't expect something tangible to arrive at any point. Plenty of intangibles though....and generally a very morbid, dark and ultimately unsatisfying film. Probably needs watching twice to appreciate what its trying to do.

Excuse me what comes at night? - It Comes at Night review by TH

Can't really disagree with the review made by the member review by 'GR'. A film based on an atmosphere of claustrophobia, trust and security, what actually comes at night is a terminal disease and whose to say it probably comes at day too on the back of some form of a nuclear event or apocalypse or something we have to set our minds to. The 'average' viewer will probably be left largely disappointed at the low keyness to it all, all atmosphere and not enough else but Hey-ho the critics seem to think it's a good watch so maybe what do I know?

This is another entry in the catalogue of post-apocalypse paranoid fantasy movies. It's better than some in that it deliberately strips things down to a simple story and a credibly desperate situation.

It's a kind of home movie as made by a family met by the wayside in Cormac McCarthy's 'The Road'.

I give it one more star than the previous two reviews because I like the ending - it's suitably hopeless and pessimistic!

What comes at night??? - It Comes at Night review by TR

What a misleading title, nothing to do with the film in my opinion. This is once again a non-triumph of style over substance. A storyline so bare it's virtually non-existent. A bit of meat on the bones at least!

Absolutely NOTHING Comes at night or even in the Day,Just Boredom . Yawwwwnfest .

Possibly one of the Slowest and Most Tedious films I have seen over the last 2 years ...

It is just another Typical, Post Apocalypse ,worried about getting sick ,everyone paranoid about everyone else having the infection kind of thing ,of which there are Millions at the moment . I wouldn't bother ,it almost Bored me to death waiting for anything relevant to happen between the teenage boys Nightmares .

Whilst the film builds up the tension of what's happen we never find out what's out there. Bit frustrating really as could have a good film and when film finished it left so many questions. Would not recommed

Disappointing - It Comes at Night review by WH

This film has some genuine moments of tension but it's too slow and never really delivers on its premise.

Don't be fooled by the title; the only thing that comes at night is boredom...

Well, I liked it! - It Comes at Night review by AL

Okay, the title is misleading, but this is a well made film. Thankfully the script did not fell that it had to regail the viewer with the details of whatever had happened to put these people in this situation, and treated the viewer as an adult. The acting is superb, and much is done with a small set. I feel this could even hang together as a stage play. This is more of an observation into human behaviour rather than a horror film.

It Comes at Night review by Mark McPherson - Cinema Paradiso

There was an argument in the lobby after It Comes At Night. The film was marketed as a horror film, but the audience disagreed with the genre title, believing it to be more of a thriller. Is it though? What constitutes horror? Must there be blood and gore? Should there be a monster in the woods or a slasher behind the walls? Everyone seems to have a definition. Mine is that if a movie can bring out some sense of terror that can creep deep into your skin with unease, it’s horror. And this film is most definitely a horror picture.

I think the confusion comes in the expectation of a monster from the “It” in the title. The “it” is most likely the disease that has wiped out most of mankind. The first few shots show what happens to you when infected. You look tired, your skin gray, your veins bulging, words garbled and vomit black. This is the case for the elderly grandpa of a family living in the woods. They take the precautions of taking the old man’s dead body out into the woods, digging a grave and setting his body aflame. They’re smart enough to survive the fall of man. Perhaps too smart.

The family is composed of Paul (Joel Edgerton), his wife Sarah (Carmen Ejogo), and his teenage son Travis (Kelvin Harrison Jr.). Far from civilization, they live a simple and safe life in their cabin. They hunt and maintain the home by day, sealing it off at night to any outside forces. When they come across a man trying to break into their house, Paul puts him through the ultimate test. He ties the man up outside for a day, seeing if anyone else comes looking for him. After a bit of interrogation, Paul learns the man’s name is Will (Christopher Abbott) and that he has a family of his own he is looking out for. With his livestock, Will proposes an alliance between the families as they can help each other. It sounds good for all involved, but Paul isn’t yet swayed, even when he agrees to move Will’s family in with them.

For most of the film, we see Paul’s external distrust and Travis’s uncertain mind. On one level, we agree with Paul’s measures to ensure his family’s safety, but it will eventually reach a degree where the audience will have to distance themselves. Being so detached from humanity, Paul has become less human and more of a protector that has shut out all emotion, to the point that he won’t hesitate to slaughter anybody that might present a modicum of instability.

Travis, however, is more haunted and quiet in dealing with the situation. He befriends Will’s family quickly, making friends with his little boy and unknowingly flirting with his wife. While it does feel good to speak with others outside of his family finally, there is still much weight in his mind. He continuously has nightmares and visions of his dead grandfather and spewing up black blood. Are these the early signs of the disease? Hard to say, but it’s a constant fear he keeps to himself, as are his terrors about what could go wrong with his father’s constant paranoia. Travis grows almost to accept the dangers, watching them proceed with a practically nihilistic allure for what he fears might be his final days.

This is a film that’s all about atmosphere, and director Trey Edward Shults knows precisely how to creep us out with little more than a dark hallway. One of the scariest places in the house is a mudroom that has been sealed off, the door to the outside replaced with a tarp. It comes off like an airlock into space, made all the more frightening for whatever noise may come from there at night. It could be someone trying to break in and steal their resources. It could be a wild animal. It could be just the wind.

When the film ended, there was an odd hush among the press as we all sat in stunned silence. Usually, one or two people will pipe up with an exclamation or brief utterance of their immediate thoughts, but not this time. The ending of It Comes At Night creates such a dark and depressing feeling in the end that I think we all had to sit there and just let it stew for a moment. Days later, the film still haunted me with the most intense of situations and a grim finale that brews emotions both blunt and uneasy. As much as I love the horror offerings of this year, I’ve got to hand it to this film for creating a chilling dread that lasted long after I left the theater. Forget creepy dolls, ghoulish zombies, and masked killers; this is the true terror.