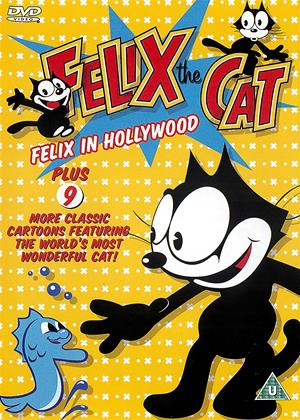 Synopsis:
Emerging from humble beginnings back in 1919 with his debut in Feline Follies, 'Felix the Cat' continues to mesmerize and amuse audiences today. His success is due in large part to his ties to the past, representing for many a certain nostalgic longing for a bygone era. As a model for testing, Felix was the first image ever broadcast on television. A timeless symbol of Americana with a refreshing graphic style, Felix has weathered the years, moving from short films, to print, to television. This video contains some classic cartoons from the early career of this curious and playful cat created by Otto Messmer for The Pat Sullivan studio.
With some of the most outrageous and remarkable animation of the early era of cinema, this 'Felix the Cat' video is truly a piece of animation history.

1. Felix in Hollywood
Look out Hollywood, 'cuz here comes Felix the Cot! In this short cartoon, Felix auditions to be in the pictures and ends up performing an impression of Charlie Chaplin. He then proceeds to rescue Douglas Fairbanks from some angry insects and in doing so, wins a long-term contract with the studios.
2. Felix Doubles for Darwin
In this humorous cartoon short, Felix attempts to get some monkeys by tunneling through the Trans-Atlantic Pipeline, fighting a giant fish along the way.
3. Felix Goes West
Felix heads westward in this romping action-packed cartoon, experiencing mishaps with an Indian tribe and undergoing an amazing chose with a ferocious bear.
4. Felix Finds Out
When Felix's owner, Willie, has trouble understanding why the moon shines, Felix jumps at the chance to answer this puzzling question.
5. Felix All Puzzled
When Felix's owner finds himself stumped over a crossword puzzle and refuses to feed the cat until it is solved, Felix rushes to the rescue. He travels to Bolshevik, Russia in search of the answer and finds himself surrounded by revolutionaries with bombs. When he returns, Felix finds the answer in an unexpected way.
6. Felix Monkeys with Magic
This most unusual and oddly mesmerizing cartoon finds Felix helping a painter draw a picture with the powers of magic.
7. Felix Gets the Can
Journeying north to search for salmon, Felix winds up in Canada and battles with a bandit named Don McStew. In addition, he finds himself fooled by some fish and ends up canned as well.
8. A Felix Comic
A very hungry Felix roams about cleverly sneaking food away from various people, ending in his being chased westward. On his way West, he hides in a Pony Express sack and consumes all the food inside, making some very hungry cowboys angry enough to start shooting. He also manages to upset a pack of Indians who let loose a hail of flying arrows.
9. Felix the Cat and the Goose That Laid the Golden Egg
Felix comes into the possession of a golden egg-laying goose named Goldie and gives away gold to the poor. Unable to resist the temptation to steal, Captain Kidd, a greedy bulldog pirate, snatches the bird and stows her away on his ship. Felix boldly swings into action, rescuing Goldie and capturing Kidd and his crew.
10. Felix the Cat in Neptune Nonsense
When Felix's goldfish Annabelle becomes lonely, he goes on a fishing expedition to catch her a companion. He soon finds himself dragged underwater by a swordfish and there, discovers a fish friend for Annabelle. Upon leaving, however, he is chased and captured by the local fish and is eventually brought before King Neptune himself. After Felix pleads his case, he is allowed to choose a fish from a nearby orphanage.
Directors:
Joseph Oriolo, Mr. Lawrence, Chris Moeller, Patrick A. Ventura, Burt Gillett, Tom Palmer
Producers:
Joseph Oriolo, Craig Kellman, Pat Sullivan, Amadee J. Van Beuren
Voiced By:
Pierre Guillermo, Jack Mercer, Charlie Adler, Philip Maurice Hayes, Brian Peck, David Prince, Theresa Randle, Kevin Schon, Thom Adcox-Hernandez, Corey Burton
Creators:
Otto Messmer, Joseph Oriolo
Writers:
Otto Messmer, Joe Stultz, Joseph Sabo, Joseph Oriolo, Sid Marcus
Aka:
Felix the Cat: Felix in Hollywood Plus 9 More Classic Cartoons!
Studio:
Delta Visual Entertainment
Genres:
Children & Family, Kids’ TV

Reviews of Felix the Cat