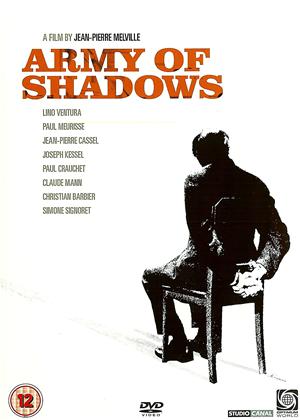 Reviews (6) of Army of Shadows

As soon as I started watching this film, I felt I was seeing a masterpiece unfold. What kind of courage do you need to carry on fighting an utterly evil and merciless enemy who for all practical purposes has already won? If this movie is telling the truth, you have to become as ruthless as the people you're up against, yet without losing sight of what you're fighting for.

Melville portrays this dilemma expertly. The resistance fighters sometimes do things which under normal circumstances would be inexcusable, but they're always shown to be forcing themselves to act this way because it has to be done, and fully aware of the horror of what they're doing. The Nazis have no such scruples, at one point turning the routine execution of prisoners into a sadistic game for no discernible reason, presumably because simply shooting them got boring after a while.

And in a masterly sequence, the central character, during a visit to London, takes cover in the nearest house during an air-raid, and witnesses soldiers and military auxiliaries of both sexes young enough to be his children defiantly jitterbugging to the latest hot jazz sounds while bombs shake the building because when you're that age, death isn't invited to the party. Although he simply watches for a while before leaving without saying a word, we clearly understand that this joyous affirmation of life even at a time when death could come at any moment sums up everything he's fighting for, though he's seen and done far too much to ever personally know such innocent optimism again.

These are not Hollywood resistance fighters, and this isn't "The Heroes Of Telemark", in which a tiny band of hopelessly outgunned Norwegians take on a Nazi army and win the war by denying Hitler the A-bomb. These are very reluctant heroes indeed, many of them middle-aged and none of them glamorous, and what they do doesn't really achieve all that much, and sometimes fails disastrously. The point of this film isn't that people such as these can sometimes miraculously defeat impossible odds, because that simply isn't true unless you're a blatantly unrealistic fictional character who will automatically win because you're the good guy and Hitler isn't. The point is that even though they can't do much, they do it anyway, despite the fact that at best they'll probably die, and at worst they'll suffer a literal fate worse than death, eventually followed by death. And they do it because faced with absolute evil, they have to at least try to do something, and they couldn't live with themselves if they didn't. That's not Hollywood heroism. That's true heroism, and this is honest and unflinching a portrayal of it as you'll find anywhere.

Accuracy and menace - Army of Shadows review by SoniaGee

I watched this film, and was gripped by the cold way the characters were. Both the occupying enemy and the patriots........I felt during it, that it must be exactly how people are during occupation of one's country. Ruthlessness, on both sides. Prime acting, scenery, mood.

Made a few years back when real events were still in memories. One of the best films I have ever seen.

This is a totally absorbing film entirely justifying the great reviews it seems to get from most critics. The portrayal of the singlemindedness, courage and frailties of the active resistance members and the moral dilemmas and risks they face day-to-day is well told. The acting is great and there are some good quite unexpected action sequences. The locations and weather are grim and a lot of the filming is in twilight or at night. The film really asks the audience what they would do - go on with life as normal, or take the dangerous path of resistance and potential betrayal.

Director Jean-Pierre Melville was a great fan of the 1930s Hollywood gangster movies and in "Army of Shadows" the resistance fighters take on the insouciant air of people going about their business even if that involves killing one of their own. Lino Ventura plays the leader of the underground cell with steely determination, even when taking his first parachute jump he has a little glance at the approaching ground, his life being less important than the overall aim of getting rid of the Nazis.

The opening scene of the German army marching past the Arc de Triomphe is as ghostly as it is ghastly. It sets the grey tone for the rest of the film.

Some minor gripes, all the characters looked immaculate, except those that had just been tortured, it was a pretty austere time in French history. The British servicemen in the London nightclub had the carefully groomed hair of the 1960s and, definitely no double yellow lines outside the Park Lane Hotel in 1942.

One of the best foreign war films I have ever seen.

Brilliant story of the French Resistance, superb acting and gritty atmosphere and locations.

I loved the slow pace , Melville builds the suspense and terror with great care and shows the horror, and bravery of the French .

Having read other reviews I was expecting a lot of this film but was left disappointed. The film relies too much on the subject matter to carry it through. The direction is heavy handed and the acting is is obvious and the characters are overplayed. The film does raise questions about war and occupation but the director appears to want to ram them down your throat in case you miss them. I can appreciate that when the film was made the war was still raw in some peoples minds, but I don't think the film ages well. Not a cinematic disaster by any means but certainly not up there with the best films of all time. Worth a watch from a historical perspective.