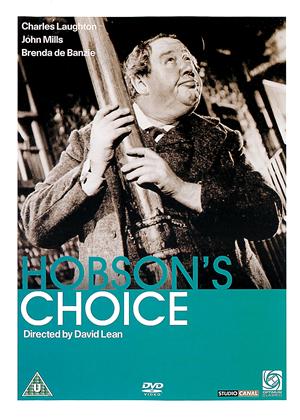 Based on a play by Harold Brighouse, this is not only an excellent stage play (I saw a revival at Birmingham Rep some years ago) but also an excellent film, combining a moral message with British humour.

Widower Henry Hobson is a successful bootmaker in 1880s Salford. He has three daughters but is a little stingy with his money (other than in spending rather too much on drink in the 'Moonrakers Arms') and forbids them to get married to avoid paying marriage settlements. He regards his oldest daughter Maggie, an astute businesswoman in her own right, as being on the shelf at age 30. But Maggie has her own plans and sets her sights on Will Mossop, Hobson's talented bootmaker, bosses him, educates him, weds him, and sets up in business with him. In a year they have become more successful than Hobson, and return to take over his shop.

Acted with much humour by a broad range of British talent, I enjoyed this very much. Apart from the well known leading men Charles Laughton and John Mills, in these older films I like looking out for small parts played by others who later became famous. There is a young Prunella Scales, later best known as Basil's dragon of a wife in 'Fawlty Towers' and also John Laurie, later best known as Private Frazer in 'Dad's Army'.

Every moment of this nice long film is a joy to behold. Sure, it's old, not in colour & the story line is whimsical. So what, it's still a fine example of the best of British films.

I'm pretty sure I first saw it as a young boy when it came to my local picture house in Birmingham. Second time around, the thing I noticed most was how full the sets were; the external shots are very "busy" & include lots of authentic signage but all of the internal scenes are a fascinating image of sets with vast numbers of furnishings, tools, stock & ornaments. The scene setters really knew what they were doing.

Some modern day commentators have said that this was not a happy band of actors but they weren't there so how would they know. Either way, it didn't stop all the actors putting in outstanding performances. Older fans of "Coronation Street" would be pleased to see old misery guts Albert Tatlock doing his stuff as one of the shoemakers.

I hope you enjoy this lovely film as much as I did.