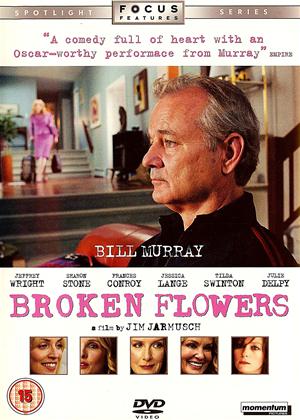 Great cast, interesting idea, but come on, SURELY we needed to learn who the mum was!

Got the picture very quickly of sad pointlessness of Don's life - didn't really need to see Bill Murray sitting stock still & expressionless for what seemed like hours on end.

As for the end - unexpected which isn't always bad, but pure cop-out and no message whatever

Failed To Live Up To Initial Promise. - Broken Flowers review by CP Customer

Despite the initial promise I felt this movie failed to deliver. Moving along at a snails pace my wife and I initially fell asleep after 20 minutes of watching this. I did try it again hoping that it would pick up once the central character (Murray) got visiting his old flames but it didn't. The dialogue between Murray and old flames is met with stilted silences and nothing of any real interest really came out of these meetings. Coupled with an unsatistactory ending make this film one that I didn't enjoy and couldn't recommend. One point for the story premise and another for a great opening / closing tune.

I don't usually like Bill Murray (I hated Lost in Translation) - and neither do I like the sort of hipppy-dippy Californian-style movies - all the self-obsession and focus on 'being happy' and finding 'closure' bores me.

However, this is watchable - it is all saved by the comedy of situations, the hilarious amateur detective neighbour (though why a poor family is living next door to a rich man is never explained! Or are they in his garage? I dunno!).

There are funny encounters - and believable types.

But I agree with other posters: the lack of resolution in this movies goes beyond ambiguity to be very annoying - as annoying in fact as the DREADFUL Ethiopian jazz music that made me wince every time it played.

No doubt the writer/director thought the ending would be ambiguous and make people think; sadly, it just annoyed - because more clues were needed so the audience could think: of the mum could be that one or that one, and the son could be... etc.

The writer/director needed another pair of eyes and ears to tell him: this does not work. Stories need resolution of the main plot - and that would STILL leave ambiguity and many questions unanswered (subplots can stay unresolved). This, I suppose, is the problem with writer/directors and vanity projects: they're too quirky and desperate to be different for their own good.

Worth a watch though - and some funny lines make it worth the trip.

A waste of time - Broken Flowers review by BE

Very disappointing. An hour and forty minutes of virtually nothing plus an ambiguous ending.  Must do better.......

We all loved the older Murray in Lost in Translation but here he does his pensive and awkward look a little too much, although the curt script is largely to blame. Nevertheless, the gentle roll of the road-trip plot is soothing and the film does manage to convey a sense of the ambling meaninglessness of the life of the main character, Murray's Don. If you like an atmospheric amble then you'll like it, but if you like eventful dialogue or plot then give this a miss.