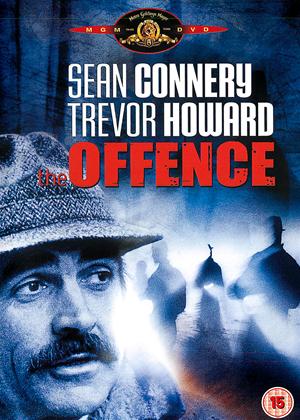 Reviews (3) of The Offence

This film is a great find: not only does it have Sean Connery and Trevor Howard - (and bizarrely Peter Bowles in pre-To The Manor Born days), it also has a fine if a little theatrical and Pinter-esque script, and an interesting director in Sidney Lumet, and a piercing score by Harrison Birtwhistle....................

The first 10-15 minutes or more is almost completely free of dialogue, as the story seeps into the screen and it becomes obvious that a child killer is on the loose, after some baffling sequences that make sense later........... I loved the silence in this film, and the piercing sound design, aimed at making aural the troubled mind of the protagonist - but perhaps what most impressed me was the way a police thriller turned into a deep psychological thriller about the mental breakdown of the Connery character. This movies is SO much more interesting than most Hollywood police thrillers today. I'd compare it to Get Carter - but better, for me, anyway..........

My first criticism is that perhaps it is is sometimes a bit dated, 1972 still being infected with that tiresome sixties vibe - so we get too many odd sound and vision episodes (though some are OK)........ My second is that, especially when characters are shouting, they are hard to hear - not because of background music, as in films nowadays, but because of the less good microphones used back then: if I watched this again I would certainly use subtitles from the off (though the DVD menu design is rubbish so you'll have to search for the hard of hearing thing)......

But all in all: this film is great. A must-see. In my top 10 or even top 5 British thrillers. It's a film that I have never seen on TV and it's been sadly neglected, I think, for some unknown reason (maybe the child killer theme?)

The plot is simple enough. A very average detective who is not particularly sound in mind becomes tormented by a man he suspects of killing children and kills him while he is in custody. He is pretty foul to his wife who tries to help him. The rest is weirdness. Some is good weirdness, the opening is shot at sixteenth speed, this is pretty effective at suspending the tension. Some is just daft. You won't see Sean in a less heroic role.

Spitting in the Eyes of Fools - The Offence review by CH

Against the concrete blocks of malls - full of vanished chain stores - somewhere in England, there pull up, amidst the obligatory rain, Capris, Maxis and those Rovers which look as if, at some point, a large animal has sat upon them. Quite possibly one of those animals had supplied the material for the brown, fur-lined car coat sported by a heavily-moustached police sergeant (Sean Connery) who wears it for most of a film from which he is rarely absent. Under pressure, he finds scant relief in a pub where a monstrous Red Barrel keg squats upon the bar, an otherwise grey-hued world made all the more so by an HQ whose narrow corridors are unadorned breeze block, the offices off them partitioned by stud walls and polystyrene ceilings scarcely able to mask the savage turn that interrogations take during the hunt for a child rapist.

Long before Life on Mars, here is England at the time of "Life on Mars?" The Offence (1972) was adapted from his own play by John Hopkins, who was best known (in the critical world) for his television plays Talking to a Stranger but had also worked on Thunderball. Connery's enthusiasm for the play had brought in Sidney Lumet with whom he had worked on another harrowing drama The Hill (1965). The many angles from which The Offence is filmed increasingly adds to the effect of a man cracking up. The opening scenes of a routine procedural turn into something else, all the more so with the arrest of a suspect Baxter (everybody is reduced to a surname, this one played by the excellent Ian Cannen who died in a motor smash towards the end of the century).

A turn to events comes with Connery's return home (a flat whose rooms appear to form odd angles), where he promptly smashes one of his wife's china objects as he lurches for the very-Seventies flip-lid cocktail cabinet and knocks back whisky at a rate which, in ordinary circumstances, would have him incoherent rather than providing that rare thing - a convincingly maudlin drunk scene - as he lays into his dressing-gowned wife, a frazzled Vivien Merchant. This scene, with the two of them, lasts over fifteen minutes, and never stales; nor does one which, equally long, finds him in the company of a superintendent sent to conduct an inquiry - Trevor Howard, who, during several cigarillo-smoking hours (there is a clock on the wall) not only, for once, lets his mask slip but also his jacket and even his tie.

To say anymore about what is going on would be unfair, just as it would be to remark that, at moments, in a certain light, Connery's face anticipates that of Basil Fawlty whose rages would be mild stuff besides those displayed here. On all sides, here is bravura acting directed towards a troubling psychological point of view which had the film little appreciated at the time by the hoards from Ibiza to the Norfolk Broads - especially as the soundtrack, in one version, is by Harrison Birtwistle (curiously enough, the other one largely lacks it).

My typing is my bond: there is much to explore in the other Sean Connery.