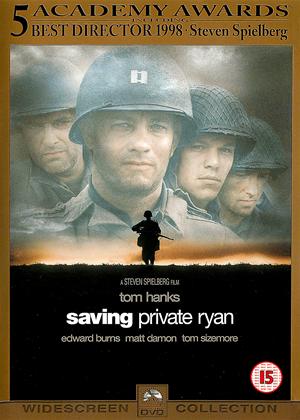 Spielberg has broken from the norm with this film and has the courage to depict war as it really is. Previous war films have been heavily sanitised to 'protect' the viewer, and Saving Private Ryan acts as a wake up call to the public, especially to myself and the younger generation, who have never experienced a major conflict in our lifetime. This film acts as an antidote to the traditional John Wayne style war movie. War is not fun, and this film removes the myth that when a soldier is shot, they fall to the floor quietly and lie still. Some of the injuries suffered by the soldiers are truly horrific but the level of violence is not gratuitous and is necessary as it adds to the level of realism.

Many people have argued that this film only portrays the American side of D-Day, neglecting the contribution of the troops from other Allied nations. Whilst this is true, Omaha beach and the areas featured in this film were areas attacked by predominantly American troops, and to feature the entire Normandy area of operations would overly complicate the story. The scene showing Omaha beach after the battle, with the sea flowing red with all the blood spilt, is particularly poignant and brings a lump to the throat of everyone who sees it.

I recently watched this film with my grandfather, who landed on the British 'Gold' beach in one of the first waves ashore on June 6th 1944. He watched the first 20 minutes of the film, which depicts the D-Day landings, with tears in his eyes as the memories of that day flooded back. While he got through that day unharmed, a number of his friends and comrades were not so fortunate. The film transported him back 57 years, and he said that this is the closest you can get to the reality of the landings without actually being in a landing craft and coming under fire.

Saving Private Ryan aptly demonstrates the horror and chaos of battle. After watching this film I found myself with a new found sense of respect for those young men who were thrust into the Hell of World War 2 and still carry those memories as pensioners. Stunning, moving, compelling, and deserving of all the accolades it gets.

One of the best - Saving Private Ryan review by CP Customer

This movie is up there with the best war films ever made.

The film is a must see and this blu ray version couldn't be bettered. The film detail and nuanced lighting are briliant.

When Saving Private Ryan first came out, it not only kick started my love of WWII history, but also showed a side of war which had not been put on film in a way like it before. Far from battles which mainly occurred off-screen with no focus on slaughter, in the first 2 minutes of the beach scene opening, most of the nameless men you see on screen have been slaughtered. And this is what Spielberg gets across in those 20 minutes more than anything: these individuals, some of the bravest men who have ever lived, don’t even get a chance to fight. The waste and wounding which is burned into your brain and onto your eyes never leaves you.

Using hand held cameras to make this up close and personal, you are in the thick of action. Whether on the battlefield or simply watching the chosen men for this mission interact, you are alongside them, sharing the horror, humour and grief they all have to deal with.

Although Tom Hanks is the A lister at the centre of the movie, the character who made the most impression on me was Edward Burns: Reiban was someone who, although a big presence in the group and quick to anger, also was the one who had the most difficulty trying to understand the situation he was in, as well as trying to survive. And the brief moment between him and Ryan before a battle, (a look which says a thousand words, with no dialogue) shows that even when there are no guns firing, the drama can be just as hard hitting.

But the 4K remaster made me see the film in a completely different way. Everything was more visceral and the washed-out look of the film makes the contrast even more stark. This was a perfect 4K remaster of a classic.

Not for the sensitive.... very 'raw and real'. Hanks is brilliant - different type of role for him and he does it very well, supported by a really good cast and horrible effects. Deserved all its oscars but not because it's a particularly enjoyable film...!

Great start and closing battle scenes, but the 'human drama' does not ring true that fills up the middle. Guess I've been spoilt by 'Band of Brothers', which Speilburg made following the success of this film. He cut out all the false histrionics you would not get in a platoon of elite soldiers - even in the US army - which does not ring true at all.

This does not glorify war. - Saving Private Ryan review by RP

I saw this at the cinema when it was first released and now again on DVD I was just as shocked by the first 20 minutes. Certainly it does not glorify war. If this is what war is like, then that's one place I never want to be. After that – when the storytelling begins – it all seems a bit of an anticlimax, and the premise that a small platoon of troops is sent to wander semi-randomly around to rescue / retrieve a lone soldier seems a little far fetched. There are other flaws that bug me as well, from its over-riding American war perspective to the wooden acting abilities of Tom Hanks. I guess this sums up this film for me: multi-Oscar winning, flawed action film masquerading as a war film, some very powerful scenes, and despite my reservations Tom Hanks does act better than in many of his other films. It is most definitely American and the patriotism is a little over-done for this Brit. But it's a good film and I rate it as 4/5 stars.