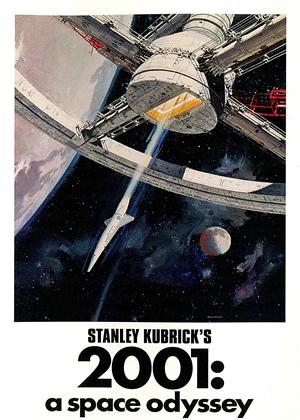 A PIECE OF CINEMATIC HISTORY - 2001: A Space Odyssey review by CP Customer

Viewed a science fiction film (as some reviewers have) this will appear somewhat lacking to those who require much more plot and essentially more thrills. 2001 is a work of cinematic art that rightly deserves its spot as one of the greatest films ever made. The sheer beauty in the way this film has been constructed and edited is a spectacle that I can only assume was immense on the big screen but also quite startlingly beautiful on the small screen. It appears to me the work of indulgence that is rarely given to directors and as such we see the crossover of artistic imagery with cinematic story telling, not a sure fire way towards commercial success but it succeeds in its balance of the two. The film features some of the most repeated scenes in cinema and some of the most famous; its use of music complimenting imagery is truly inspired.

I don't believe this film will appeal to everyone and certainly not to those expecting a star trek style SF film. However, if you have a love of art and like a story to be left open to interpretation then you will find this about as enjoyable as cinema gets.

A New Perspective To This Classic - 2001: A Space Odyssey review by CP Customer

Too young to see 2001 upon release, I've had to make do with video and DVD versions. Whilst not an immediate replacement this blu ray edition brings new clarity to the experience. As seen with Kubrick's The Shining, this is another remarkable film print, perhaps the best yet of the Kubrick releases on this format. The film itself divides opinions to this day. It set the standard for science fiction and is all the more remarkable when you realise this was all achieved before the age of CGI visual effects. Just how they achieved the look, feel and overcame technical difficulties are all laid out in the series of documentaries here. The film is long enough, perhaps too slow for some, but there are many more hours of entertainment to be had in the menus. Watching these and then going back to 2001 brings a new perspective to the experience.

A Shocking Waste Of Time - 2001: A Space Odyssey review by AP

This came out when I was at junior school so I'm old enough to have heard about it (a lot) but never got the chance to see it. What a dissapointment! I waited 40 years to devote a couple of hours to seeing 'a masterpiece' and was REALLY let down.

It is, with out doubt, the biggest load of whacky, self indulgent garbage I have seen since Black Swan. Kubrik on a good day is a master (A Clockwork Orange) but this has to rate as a stinker. No plot....at all, really annoying music score, looooooong sequences of nothing other than shots of a spaceship floating around in space, actors in monkey suits grunting at each other and an ending that just left me saying...'what on earth was THAT all about?'

I invested over 2 hours of my life into this film and I will never see those again and consequently I'm really annoyed that I bought the hype. I don't know where Kubrik was when he put this thing together but it certainly was not planet Earth.

2 out of 11 members found this review helpful.

I watched it over two days and yes it caught my attention but only because I'd read the book. However I expect in it's day, with a huge cinema screen it would have been fantastic. However the story line from 'conception to infinity' still makes it one of the best sci-fi movies ever made. So even though it was a tad boring etc, I could still appreciate it.

I can certainly appreciate this as a piece of art, it is wonderfully shot but slow, tedious imagery just isn't enough for me to keep up an appreciation for the medium of film. So many times we are treated to events in real time; if it's going to take ten minutes to do a task, you will be shown it, usually with no dialogue and occasionally with a soundtrack that wants to make you reach for the volume control to turn it down. The fast forward button also came into use for the first and last half hours of the film.

Odyssey (as defined by the Cambridge English Dictionary): a long, exciting journey. Long? yes. Exiting? no. One of the greatest films ever made? that's purely down to personal preference. I prefer THX1138 as my cinematic science fiction art piece.

A deliberately provocative film that still divides audiences to this day although often cited as one of the greatest films of all time. It is certainly a bold and ambitious film and probably the first serious science fiction film that attempted to delve into the origins of man and the meaning of intelligence. It deals with theories around evolution, development of technology and artificial intelligence and man's place in the Universe. It has one of there most famous cuts in film history as it jumps four million years from a prologue sequence that follows some early ape like humans as they are transformed by a strange alien object to a time of space travel. The middle section of the film is a fairly straight forward narrative starting on the moon and the discovery of an alien artefact that is sending a signal towards Jupiter to the mission to find out what's out there. A mission that goes awry. The epilogue of the film is a psychedelic exploration of the meaning of existence. There's little doubt that the film raises more questions than it answers and for those who just like straight forward stories this will baffle and annoy but it is a film that should certainly be seen at least once because it's definitely a landmark in cinema history from a genius director. For film fans this is a film that draws you back for repeated viewings just to allow you to check new theories and to puzzle it out.