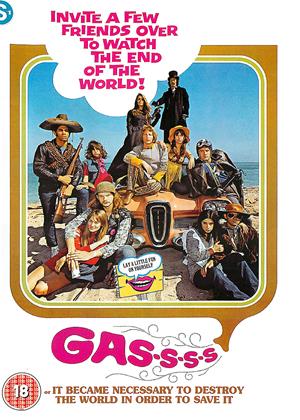 Somebody open a window! - Gas-s-s-s review by Count Otto Black

Once upon a time, Roger Corman was the ultra-prolific king of the B-movies. Although he's still alive, and still being credited as executive producer (whatever that means) of films like "Sharktopus", it's a long, long time since he directed anything, and this film pretty much marks the exact moment when he ran out of steam.

This is a counter-culture movie cynically thrown together by somebody who was always painting by numbers when it came to that kind of thing. Imagine a rip-off of "Head" without the Monkees, 90% of the budget, or 99% of the imagination, but with a soundtrack and a brief in-concert cameo by Country Joe and the Fish (obviously filmed separately from the rest of the movie, and very badly), major participation from Talia Shire (demonstrating exactly why A-list directors who cast their daughters in "The Godfather Part II" should have hired an actress instead), and the kind of humor you'd expect from a 44-year-old man taking that "don't trust anyone over 25" hippy mantra so literally that in this film, being over 25 equals being dead, in the belief that this will automatically make those young whippersnappers with their long hair and funny clothes go see it.

Corman clearly neither understands nor approves of the lifestyle he's pretending to pander to. He misses the point to the extent of including jokes about vegetarians becoming delirious from malnutrition unless they grow out of their silly food-fad and adopt a partially meat-based diet, and liberated women enjoying sex so much that multiple rapists collapse from exhaustion. Whether your political sympathies are with Tim Leary or Richard Nixon, it's an undeniable objective fact that a film which sneers at its target audience in the belief that they're so stupid they won't notice is a bad film by anyone's standards. Therefore this is a very bad film indeed.

Did I mention the atrocious improv-style acting? The irritating funny voices often used in lieu of actual humor? Or the impression that a director who would shortly give up directing already had, and the whole sorry mess was lumbering along without him? This movie is so misconceived that it's not even unintentionally hilarious in a "Reefer Madness" kind of way, it's just plain dreadful.

On the plus side, as feature films go, it's really short.