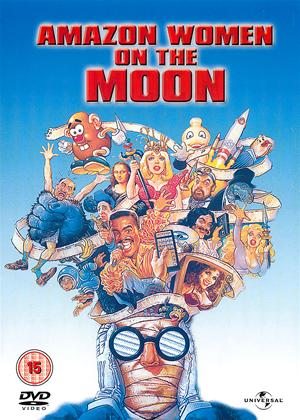 Rent other films like Amazon Women on the Moon

Reviews (1) of Amazon Women on the Moon

Remember "The Kentucky Fried Movie"? Back in 1977 its combination of unashamed bad taste and glorious silliness broke a few boundaries, as well as being a whole lot of fun. This is essentially the same film remade ten years later by an extraordinary combination of eighties Hollywood stars and behind-the-scenes talent, but saddled with a script that might have been written by an extraterestrial who didn't know what "humour" was but had read a dictionary definition of it accompanied by a flow-chart explaining what "jokes" and "punch-lines" were. There's even a lengthy sketch in which the entire joke is that real comedians playing themselves do their usual routines in a wildly inappropriate context, which only serves to remind us that 30 years ago, "standup" meant ageing misogynists in tuxedos saying "Take my wife - please!" That ancient line is actually used by Henny Youngman, whose excruciatingly unfunny standup routine you may remember from the nightclub scene in "Goodfellas".

Almost every sketch is that bad or worse. A Playboy model is completely naked all the time and nobody notices. That's the entire joke. Video pirates are actual pirates. That's the entire joke. And so on. As for the B-movie spoof the title refers to, I don't know why they bothered. It's as if they originally intended the whole film to be a parody of the so-bad-it's-mildy-amusing 1958 anti-classic "Queen Of Outer Space", but they couldn't think of any space B-movie jokes at all, so they shot a few minutes of pastiche so similar to what they were spoofing that they might as well have simply shown clips from "Queen Of Outer Space" (the astronauts are even wearing the original costumes, which first appeared in "Forbidden Planet"), and inserted them randomly into a film about various other things that unfortunately aren't much funnier.

I almost switched off early on, but it's rather a short film, so I kept watching just to see if this much collective talent could somehow keep the standard that low all the way through. To be fair, they don't. Not quite. A few of the later sketches almost manage to be marginally amusing, or at least not downright anti-funny, the least worst perhaps being the very last, a parody of "Reefer Madness" starring Carrie Fisher. There's even one moment - you'll definitely know it when you see it - that's so bonkers it looks as though the film may finally be getting its act together. But whereas the dud sketches drag on far too long, this one ends just as it's getting interesting, as though a good joke sneaked into the movie but it was so out of place they didn't know what to do with it.

This is a truly dismal attempt at comedy by people who have no feeling at all for the genre. If you want to see the film they were trying to make, put on "The Kentucky Fried Movie", and every 20 minutes cut to a random scene from "Queen Of Outer Space". By the way, I noticed that although John Travolta isn't in this film, it features both his wife and his brother, an "actor" whose sole virtue is being called Travolta but costing a lot less than John. There are a great many in-jokes of this kind that only real movie buffs will spot, such as the porn video supplier being played by Russ Meyer. Unfortunately spotting them is far more fun than watching the film.