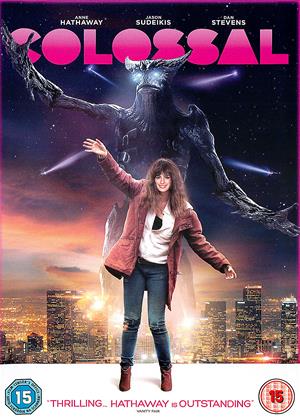 I'd heard good things about this movie so rented it because it sounded intriguing.

I am no fan of comic books - but this is like something out of one of them - with a silly, nonsensical plot which is all just sheer fantasy wish fulfilment and never explained properly.

If you like fantasy sci-fi, then this is for you. If you're South Korean, you'll probably be in monster movie heaven, as some of this nonsensical story is set there - why? It 's never ever explained.

I didn't believe the character arcs either - seemed all very pc and 'girlpower' to me. I was very irritated by what is becoming everyday sexism against men from movies - because men are BAD and women are GOOD, you see. Yawn. It's really getting very tiresome - I don't agree with sexist portrayals of ANYONE, and call out the hypocrisy of those who think it's OK to be sexist against men and boys. Now THAT is a problem our society faces - not silly comic book monsters.

And as per usual in movies, people who are supposedly alcoholics do not LOOK like real alcoholics (bad skin, shaking, dirty, hunched etc).

Watching this, I couldn't help thinking all the time that Anne Hathaway has an enormous mouth - bigger than the monster's! Big like Julia Roberts big. WHY do so many actresses have huge mouths? Is it genetic? Or cosmetic surgery? Is that what casting agents are looking for - cavernous cakeholes? Weird. And why only for women? Men in movies seem to have smaller mouths...

A mess of everything - Colossal review by RL

The idea behind it is vaguely interesting but it cannot decide if it is a sci-fi film, a romance, a drama, a comedy or what. In the end it's a bit of a mess of everything. None of the characters are very likeable or real and the back story which gets it up to the present day is flimsy. Avoid.

Anne Hathaway plays Gloria, a hopeless drunk but a good soul. Dumped by her boyfriend who can no longer tolerate her binges, she returns to her childhood town, where she meets up with a childhood friend, namely Oscar.

Oscar owns a bar and Gloria continues her all night benders.

Meanwhile in Seoul a gigantic monster terrorises the city. Gloria then discovers that she controls the monster.

Gloria's monster is then joined by a gargantuan robot, who is controlled by Oscar.

Obviously these actual monsters are metaphors for alcohol and the personalities of the two on a deeper level. Can Gloria defeat these monsters and get her life back under control.

I particularly liked the showdown, with Gloria resembling a lawman facing down the bad guy, complete with that walk down the street. A highly unusual film that I much enjoyed.

I saw the trailer. I read reviews. Nothing made it stand out and if anything it all tipped towards the negative side. I put off watching this for a while and thought I'd give it a pass entirely. The only thing that made me add it to my list was that I'd seen the director's past films, which were silly but entertaining, and this film seemed the same.

I'm glad I changed my mind as it was surprisingly entertaining and, without spoilers, took a dark turn that I didn't expect and added some much-needed depth. While the concept of a woman controlling a 'Kaiju' type monster on the other side of the world is a bit far-fetched, and there are some obvious plot holes, you need to just let go, accept it and let the fun begin.

I can't say if the monster symbolised something or if there's anything worth analysing there, but that was all background anyway. The film is mostly focused on Anne Hathaway and Jason Sudeikis in a small American town. What sold it for me was that it begins with a typical rom-com setup, then transforms into something much darker which hints at toxic relationships and perhaps domestic abuse.

All I wanted was a fun monster movie, but I got something more instead.

An intriguing premise drives the film irresistibly forward. We follow the daily trials of ditsy Anne Hathaway in small-town America while a monster ravages Seoul in South Korea. Somehow she’s connected to it. It begins to mimic her actions. That much is on the film poster. Then things start to get out of hand. To say any more would be a spoiler, but it’s constantly fascinating and builds to a crowd-pleasing climax. Writer/director Nacho Vigalondo keeps a steady hand on matters and shoots with a keen eye for composition. Shame the DVD has no extras.

But why ? - Colossal review by WM

This is one of those films which begs the fundamental question - why was it made and then why was it released ?

It is astonishingly bad and has no real saving graces anywhere.

I didn't think I put this on my list, but it was delivered...

My wife sometimes like trashy films but even she said it was very very bad.

Why doesn't everyone love this - Colossal review by LL

It's got broken people trying to make their lives work (almost every film) and giant monsters, I don't get what's not to like.

Allegorical film about the destructive monster that's created by an act of childhood bullying and the long lasting damage that it does to peoples lives.

An enjoyable, light hearted and memorable film about a potentially dark subject matter. It's easy to watch, but there's a few too many stereotypes and cliches for my liking.

Touching on themes of addiction, mental illness, abuse, misogyny and class, Colossal is a worthy companion to Get Out (which came out the same year). If there is one, one problem with Colossal would be that race isn’t as looked into as misogyny or class. Though Anne Hathaway does a great job conveying her character’s horror at the destruction and lives lost in Seoul, she does come across as a bit of a white saviour at one point. Overall, this film is a weird and wonderful twist of monster movies and chick flicks: one we’ll likely discuss for years to come.

If you want something completely different!  you have it here.  Not an easy concept to bring to the screen but the main actors are superb in their roles.  The direction and editing are a joy to behold.

Colossal is a troublingly clever drama that manages to weave a tale of standing up for yourself with a geeky lace. Despite a fantastical aspect, there’s a more relatable aspect to the deeply flawed characters that don’t exactly make easy transitions or fully comprehend their actions. When they stumble, they stumble hard, just as much as the giant monster and robot that duke it out in Korea. It’s still a frustrating film, however, considering how much I wished the characters would come to terms with themselves amid a haze of indecision, laziness, and generally being overwhelmed.

The premise is at least a unique one. Anne Hathaway plays Gloria, a woman with a life that hasn’t come together yet. Rather, it’s falling apart. She’s unemployed, drinking too much, loses her boyfriend, and is kicked out of her apartment. Where she falls is back into her childhood home of New England. Her life feels as empty as the unfurnished house she now occupies. At least she’s in good company with her childhood friend Oscar (Jason Sudeikis) not only offering her a job but also bringing her furniture and electronics to make her home feel more home-like.

Then something astounding happens. A giant monster randomly appears over in Korea, stomping straight through a city. It doesn’t affect much of anything in the sleepy New England town but it’s still pretty bizarre. Then things get more bizarre when Gloria discovers that she is the one controlling that monster who seems to appear at the same time every evening. Whatever actions Gloria performs on her local playground, the same actions occur in Korea with the monster, happening in real-time after she convinces her local pals to observe.

This is a neat discovery and it’s thankfully never explained too much how this is possible. This is clearly just fantastical showcase for Gloria trying to come to terms with herself. This becomes more engaging when it’s revealed that Oscar can also trot into the playground and become a giant robot in Korea. What an amazing ability. But with great abilities comes a greater need to use them wisely. And considering both are drunks with massive anxiety issues in their lives, they’re clearly not capable of using these powers specifically for good. So it should come as no surprise that one of them gets hammered and stumbles onto the playground, stomping around and bringing death and destruction to Korea.

There’s a few problems with such a story. As the film proceeds, the allegories become so blatantly unsubtle it’s not the least bit of a shock that we’re given some silly origin about how Gloria and Oscar attained such power. The darkly comedic aspect of this development never quite feels there, always muddied by stammering in between the wide eyes and smiles. There’s a twist revealed to bring this chapter of Gloria’s life to a fulfilling conclusion but it takes some loopy leaps in logic that are unfortunately a bit hard to glaze over when the narrative becomes so blunt.

Colossal is certainly an entertaining sight and story idea, sure to offer some great appeal and comfort for those who feel their life is going nowhere and that starting over can be tough. The merging of an indie comedy and a giant monster flick is an ambitious project for sure, to the point that I wish I could love this film for more than just the way Gloria manipulates a giant monster to dance around a city.