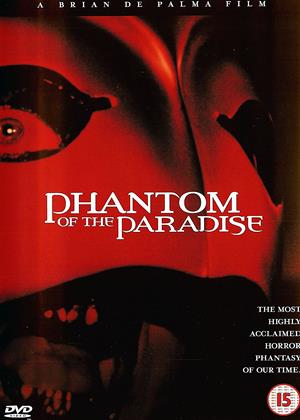 Reviews (1) of Phantom of the Paradise

Things worked out pretty well for Brian De Palma. In the seventies he was making the kind of quirky, overblown, wildly original and downright bonkers movies Ken Russell was also becoming increasingly notorious for, yet a couple of decades later, Brian was shooting billion-buck Hollywood blockbusters, while poor old Ken was literally reduced to making movies in his back garden starring his wife. Maybe some of the revelations in this film about how showbiz success is really achieved are truer than anybody ever realized?

In this typically over-the-top early Da Palma romp, the classic tale of The Phantom Of The Opera, mixed with a hefty slice of the Faust legend, runs headlong into pre-punk seventies pop at its most self-indulgent, and the results are a glorious train-wreck. An evil record producer who is not entirely unlike Phil Spector does the dirty on our hapless hero, a Barry Manilow wannabe who ends up as a glam rock version of Darth Vader. Along the way, we're treated to merciless spoofs of various clearly recognizable stars who were very big in 1974, notably KISS substitutes The Undeads (sic), whose stage-show involves the hilariously unconvincing dismemberment of the audience, and Gerrit Graham stealing the show as Beef, an outrageous posturing sissy who seems to be the love-child of Ziggy Stardust and Meatloaf. And after that, it gets silly.

Jessica Harper, famous these days for "Suspiria" and nothing else, is rather odd as the love interest, with her disproportionately huge head perched on a tiny body that looks about 13, her strange facial expressions and even stranger disco dance moves, and those distractingly peculiar eyebrows, but I suppose she's not really any weirder than the rest of the cast, seeing as it includes a bird-faced cyborg piano-player with metal teeth and a screamingly gay Frankenstein monster.

They don't make 'em like this any more! And you know what? They should! Also, why is this less of a cult movie than the boring old Rocky Horror Picture Show? Highly recommended, if you're in the mood for something that looks and sounds like a Hammer horror film written and directed by Spinal Tap.