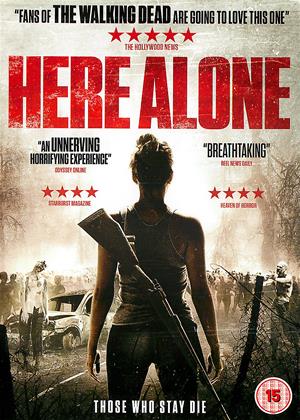 From the beginning, this is clearly some kind of post-apocalyptic story featuring Ann (Lucy Walters) suffering the indignities of a world without amenities: a world that is starkly beautiful and deadly dangerous. Director Rod Blackhurst takes full advantage of the mesmerising locations and presents us with a convincingly isolated existence. Indeed, for a good while, the only dialogue is featured in flashbacks to a more fruitful past. The music too, by Eric D. Johnson, is suitably morose and ambient.

Whilst the going is undoubtedly and convincingly tough for Ann and those few she meets up with, it’s pretty galling for the viewer too. For a long time, the trivialities that make up their existence become pretty wearing and the (understandably) melancholy dialogue gets rather dull.

Love is found within the desolation between Ann and Chris (Adam Thompson) and not even the overdue reveal of members of the living dead spices things up hugely. Chris’s step-daughter, teenage Olivia (Gina Piersanti), in shorts and a flimsy top, is chased through the woodlands before the creature is despatched, gore-free, and only then do we get a scenario that could fall under the horror banner. It’s a long time coming.

I’m quite surprised to read online reviews that praise the first two thirds of this only to be disappointed by the final act. For me, it is the other way round. Whilst I am a huge devotee of slow-burning horrors, the build-up is so morose and uneventful that the final act makes it worthwhile: the pay-off, although brief, is pretty effective and proof again that it isn’t the monsters you need necessarily fear, it is the person standing at your side.