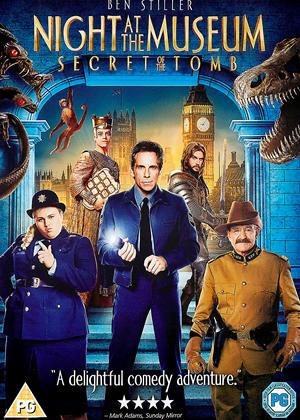 Rent other films like Night at the Museum: Secret of the Tomb

Reviews (3) of Night at the Museum: Secret of the Tomb

More drivel - Night at the Museum: Secret of the Tomb review by CP Customer

I'm not sure how many more of these they can bash out as they are now all very similar and dull. It doesn't actually matter if you nod off through it and in fact it doesn't matter if you nod off during the opening idents, you won't miss anything. I'm so glad I had this on rental and didn't waste any money seeing it at the cinema or buying it. If you have seen the first one then that is all you need to see. Please don't make any more of these, thanks.

Another Night - Night at the Museum: Secret of the Tomb review by NC

Finishes the saga, and sad to see Robin Williams still soldiering on as Teddy, although he shortly to join the items in the museum himself. He did so many great things.

Stiller and Wilson earn some more money for just cantering along.

1st is best - Night at the Museum: Secret of the Tomb review by gazmb

The first one was very good , the second one didn't find good enough story. This one slightly better than the second but still not a good enough film, Robin Williams was to good to be in the back ground. Thankfully this seems to tie the films up in to an end . It really needs to be the last one

The third entry in the Night at the Museum trilogy is a bit like going back to the vending machine for another sugary snack. You know you shouldn’t be consuming it, but it’s right there staring back at you with all its bright colors and shiny packaging. It has some new colors and a different tagline on the bag (Secret of the Tomb), but you know it won’t be very divergent from your previous experience. You tear off the wrapper and it looks so good. But after the first few bites, the blandness sets in of being an artificially assembled bit of pleasure. It’s the same old flavor of candy that will always taste the same only to grow worse with age.

If I seemed too distracted in my opening statement, it’s only because I found myself more infatuated with my 3 Musketeers bar than the movie itself. I just found it striking how there were similarities in two products that both seemed to be assembled in a factory by committee. The premise for this movie? Does it matter? Ben Stiller finds himself called upon once again to solve the problems of a museum when a magical Egyptian tablet comes down with a case of the MacGuffin rot. The infected artifact is causing the exhibits to run wild which means its time for another standard adventure with Stiller and his band of wax sculptures come to life. The usual gaggle of stars are assembled (Robin Williams, Steve Coogan, Owen Wilson) as well as a few new additions (Rebel Wilson, Dan Stevens, Ben Kingsley). Being so crowded in a film written for stock family humor and loaded up with computer graphics, there isn’t much room for anyone involved to deliver a memorable performance.

But, then again, why would you with a plot like this? There isn’t so much a story as it is just an excuse to run around the museum, interacting with all the living exhibits and playing catch the MacGuffin with a fish-out-of-water Lancelot figure. Stiller and company unsheath some weapons to do battle with a giant statue of snakes that hisses and snips. Wilson and Coogan, playing the miniature cowboy and Roman soldier, run in terror from lava in a model reenactment of Pompeii (which turns into one of the longest and sigh-inducing urination jokes I’ve seen in a long time). In the movie’s minor spec of visual brilliance, Stiller ends up chasing Lancelot through M.C. Escher’s Relativity painting where gravity is thrown all over the place as characters scurry to secure the tablet. But it’s only a small surprise out of a film that is mostly routine.

Director Shawn Levy is back to his usual go-to devices for generating a laugh. He employs the ever-irritating use of classic pop music to evoke emotion in the cheapest way. If you’re not sure if somebody can read love at first sight (or even comprehend its forceful inclusion), just insert “Best of my Love” over slow motion. The monkey of the group bounces around with usual gross antics along with moments of cuteness for the kids. He collapses nearly dead and the audience must weep. He kisses Ben Stiller lovingly on the cheek and the audience must “awww.” He urinates all over Wilson and Coogan and I suppose the audience laughs.

The colorful cast slip into the roles of various historical characters and do little more than spout out a few expected lines. Ricky Gervais pops up as the nervous museum director and Andrea Martin as the action-ready security guard. Their bits are decently amusing, but only for about as long as they’re allowed on screen which isn’t much. The back and forth between Wilson and Coogan is little more than a stereotypical battle of rowdy westerners versus upper class Europeans. Nothing all that offense; just tiresome. This applies throughout the picture as when Ben Stiller has an awkward conversation with an Egyptian pharaoh about Jews. And it’s especially disheartening realizing such sleepwalk roles were the last for Robin Williams and Mickey Rooney.

For all its bounciness of a museum come to life, Night at the Museum: Secret of the Tomb is still just the same old formula of a family friendly franchise on its last legs. Those expecting the usual routine from these types of pictures will not be disappointed with how the film adheres strictly to its own rules of comedy. Rather striking about the movie is how it boasts a message about the museum being a place to inspire a child when such a display seems to do the exact opposite. Kids deserve something far more entertaining and fulfilling than this forgettable romp through talking museum exhibits. Maybe I’m just an out of touch adult who finds himself shaking my fist too much over simple films and junky candy bars, but I trust my gut and both left me hungry.