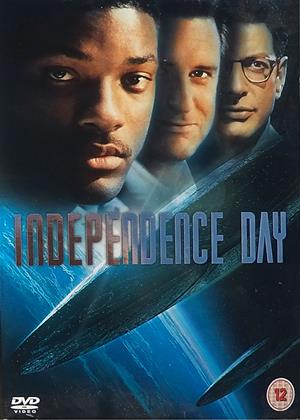 To be honest, there is only one way to watch this movie: Sat in a cinema the size of Wembley Stadium with a sound system on loan from the Rolling Stones and enough popcorn to last the duration.

From the opening scenes of a shadow falling across the moon to the eventual arrival of the alien invaders, Independence Day was always going to take the breath away when seen on the big screen. On the box, however, the effects may look far from special, but it actually works rather well as a sort of trumped-up version of Eighties sci-fi soap, V.

In case you actually have been on another planet for the last 11 years, here's the plot: cocky fighter pilot Will Smith, cable repairman Jeff Goldblum, sozzled crop duster Randy Quaid and struggling president Bill Pullman are the main protagonists who join forces when alien invaders prove they have not come in peace.

As the world's military join forces to kick alien butt, it seems apparent that all our combined might doesn't amount to a hill of beans when it comes to intergalactic warfare. Our alien cousins have come armed with 15 mile long space ships and nifty fighters that look like croissants. Can Goldblum come up with a plan to defeat the evil ETs?

Is the Pope Catholic?

For anyone who grew up on Star Wars, this was the perfect stop gap for those of us frothing at the mouth with anticipation until The Phantom Menace finally saw the light of day. As it turned out, the movie ended up boasting, among other things, better make-up than the much-hyped George Lucas offering.

It also boasts some wonderful in-jokes from the R2 logo on the wall of the Roswell hangar to Star Trek's Brent Spiner as a wide eyed scientist who's spent a little too long in a desert laboratory.

Aside from some knockout special effects - the Whitehouse being destroyed by a UFO is jaw-dropping - ID4 also features some wonderfully bad dialogue. For example, Harry Connick Jr's plea to friend Will Smith: "They're never going to let you fly the space shuttle if you marry a stripper," and Bill Pullman's rousing speech near the end, almost a direct copy from Henry V. "We will not go quietly into the night. We will not vanish without a fight. We're going to live on. We're going to survive. Today, we celebrate our Independence Day."