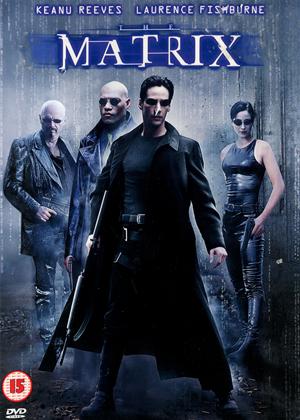 Reviews (5) of The Matrix

There is no spoon. - The Matrix review by CP Customer

This stylish thriller, set in a virtual world, is largely held together by superb effects and action sequences. However, that's not all there is to The Matrix. Both the plot, and Keanu Reeves' performance as Neo, work well enough to make this a good film.

Take the pill - The Matrix review by CP Customer

It’s hard to believe the Matrix is ten years old, as its influence remains as strong as ever. While the overlooked and superb Dark City may have hit cinemas first, it was the Matrix’s tale of a futuristic society that caught the imagination of a generation. The cool characters, groundbreaking effects, including the bullet time technique that was copied by everyone else, backed up plentiful supply of weaponry and stylish environments. The Wachowski brothers set the benchmark so high here, that despite the majority of the cast returning for the sequels they failed to hit these heights again.

An old theme, man-v-machine, reworked. I guess I would have rated this film higher if I had seen it on release - I gather it was ground-breaking for its time. I thought it a trifle tedious and lacking in human warmth - the characters are secondary to the needs of the plot. The central love affair - if it can be called such - seems to be an after-thought. The special effects are impressive and the storyline keeps up the interest for most of the time but I shan't be watching the sequels. For me, this film is more of historical interest than memorable.

Classic - The Matrix review by JD

This is one of the 20 films that you have to watch. It is as much of a sci-fi classic as The Good, The Bad and the Ugly is a western classic. The plot is so original and so complex that any description would both spoil it and be inadequate. If you haven't seen this already this is compulsory.

I just wrote a review on Aliens, probably the best of all sci-fi films.

But as with everything there are big buts making such claims and the Matrix is one mighty big but.

The Matrix blew us all away when we watched it the first time and today it remains one of the best films ever made.

No shakey cam here, just very well drilled actors doing there stuff to one of the most original plots ever devised and bringing special effects to bare of the like never seen before. And on top of that, its also pretty good...

I envy my kids being able to watch something like this for the first time.

And it has to be said, they really dont make films like this anymore!