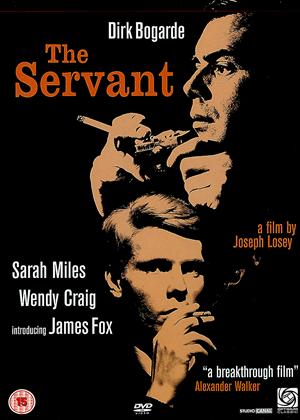 Reviews (3) of The Servant

Strange but unforgettable - The Servant review by CP Customer

This atmospheric movie will certainly stay with you, even if it's hard to figure out exactly what it's trying to say. I found myself glued to it watching 'our hero' slowly fall to pieces under the influence of his manservant and his 'sister' - like Jeeves and Wooster gone badly wrong, with every confidence abused and every vice exploited, it's a slow-motion exercise in emotional sadism and power abuse with some weird erotic undertones, both gay and straight. Some reviewers have accused it of having less to it than meets the eye, but the number of awards it has garnered surely make it worth a look.A real one-off.

The Butler Did It - The Servant review by Count Otto Black

Like almost everything else Harold Pinter wrote, this weird, nightmarish movie is about an uneasy relationship between men that changes in peculiar ways as it becomes an overt power-struggle, the motive for which is never entirely clear. Does Barrett, the "gentleman's gentleman" who's really no gentleman at all, just want weak upper-class alcoholic Tony's money? Although what appears to be a bog-standard blackmail plot is obviously and clumsily set up, it turns out to be nowhere near that simple. As the master/servant dynamic shifts, very subtly at first but with increasing momentum, their relationship goes through every possible permutation, including moments when they might almost be a quarrelsome old married couple and/or tenderly in love, despite both of them being apparently heterosexual. And then the next minute they're two grown men squabbling like little boys over who won a dodgeball game.

James Fox, whose blond hair makes him oddly resemble David Bowie before such a person existed, gets his cinematic career off to a fine start as the pathetic Tony, who is perfectly balanced between being arrogant and spoilt enough to deserve what he gets, and yet not so awful that we don't feel sorry for him when he completely loses control of his life. But it's Dirk Bogarde who easily walks away with the movie. Right from the start, when he appears to be the perfect self-effacing, utterly obedient, super-competent manservant, there's just a hint that he's not telling his master everything, which grows and grows until you can't take your eyes off him because he'll suddenly be a different person the second his employer isn't looking straight at him. There's something demonic about him; this film is almost an alternative version of "The Shining" in which it's the ghostly bartender who becomes a grinning madman as he sucks the life out of an increasingly pitiful Jack Nicholson - I have one scene in particular in mind, which I'm sure Stanley Kubrick had in mind too.

If Bogarde's a devil, then Sarah Miles is a succubus, outrageously sexy in a very early sixties kind of way, and much more comfortable in hot environments, whereas Wendy Craig's "good girl" doesn't even notice when it's snowing, which around her it usually is. No wonder she can't compete! That's one of the less subtle symbolic details, but just about everything that's visible or audible becomes horribly important, the way trivial little things do in bad dreams you can't wake yourself up from. I can't think of any other film in which a dripping tap is erotic! And Barrett's growing dominance is measured by the progressively more important rooms in which he displays an unbelievably bad painting he seems to treasure. Despite the lack of overt horror, the utter helplessness of the "hero" in the face of an apparently motiveless intruder who tears his whole reality apart put me in mind of poor doomed Henry in "Eraserhead".

This extremely odd movie builds the tension very slowly at first, but once it gets going it's absolutely relentless, and every time something predictable happens, it's topped by something much weirder that you didn't see coming. And Dirk Bogarde's gradual transformation from obsequious lackey to Mephistophelean tormentor has to be seen to be believed! As for James Fox, although he's inevitably overshadowed by Bogarde, he deserves a special mention for possessing the very rare acting skill of being able to convince us that he really is drunk. It's not quite a masterpiece, but it's an extraordinary and unique film that's utterly fascinating in the manner of one of those dreams where nothing happens but you know it's going to, and when it does, it's not what you expected at all.

Losey and Bogarde's best film. - The Servant review by Steve

Class paranoia  as Dirk Bogarde's obsequious, cockney valet turns the table on James Fox's effete toff in a schematic confrontation which concludes with Bogarde ruling the house and Fox wearing the pinny. This is probably Bogarde's greatest performance, a brilliant vehicle for Harold Pinter's sardonic, oblique dialogue. He is dangerous, hypnotic, watchful, and exactly as exploitative, degenerate and entitled as the aristocrat he seeks to dominate. And Bogarde is well on top of the sexual ambiguities. The film is an intellectual game played out by Losey within a single location or combat zone, the aristocrat's house (which the Servant proceeds to decorate to his own taste in darker colours). It is strikingly photographed within that space by Douglas Slocombe, with musical shading added by Johnny Dankworth and Cleo Laine. One of the key UK film of the sixties.