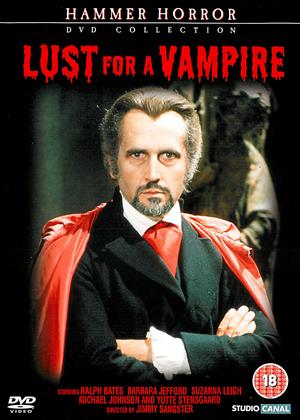 Synopsis:
In 1830, forty years to the day since the last manifestation of their dreaded vampirism, the Kamstein heirs use the blood of an innocent to bring forth the evil that is the beautiful Mircalla (Yutte Stensgaard). The nearby finishing School offers rich pickings not only in the blood of nubile young ladies but also with the headmaster (Ralph Bates) who is desperate to become Mircalla's disciple. As students in the school, inhabitants of the nearby village, and those who suspect Mircalla start to die, suspicion turns towards the Kamsteins and their ominous castle.
A visiting author, Richard Lestrange (Michael Johnson), instantly falls for her seductive yet lethal charms; and must save her from the wrath of his fellow villagers whilst protecting himself against her deadly kiss.
Actors:
Barbara Jefford, Ralph Bates, Suzanna Leigh, Yutte Stensgaard, Michael Johnson, Helen Christie, Mike Raven, Christopher Cunningham, Harvey Hall, Michael Brennan, Pippa Steel, Judy Matheson, Caryl Little, David Healy, Jonathan Cecil, Erik Chitty, Jack Melford, Christopher Neame, Kirsten Lindholm, Luan Peters
Directors:
Jimmy Sangster
Producers:
Harry Fine, Michael Style
Voiced By:
Valentine Dyall
Writers:
Tudor Gates, Sheridan Le Fanu
Studio:
Warner
Genres:
British Films, Classics, Horror
Countries:
UK

Reviews (1) of Lust for a Vampire

Spoilers follow ... - Lust for a Vampire review by NP

Fresh from playing an unnamed vampire in this film’s prequel ‘The Vampire Lovers’, actress Kirstin Lindholm here plays an unnamed peasant girl in the pre-credits sequence. She is attacked by another wraith-like bloodsucker stalking the countryside in broad daylight, which seems perfectly acceptable for the undead in these latter day Hammer films.

Immediately, the same studio-bound low-budget tattiness that afflicted the earlier film is evident here. Former DJ Mike Raven plays Baron Karnstein (presumably the same character John Forbes-Robertson played in ‘The Vampire Lovers’), dressed in suit and cape and dubbed by Valentine Dyall. He spills the girl’s blood to resurrect, in a nice gory sequence, Carmilla. Close-ups of Christopher Lee’s eyes, complete with red contact lenses, spliced from another film, are inexplicably inserted during this scene, further under-lining the gleefully cut-price nature of this production – and this barely ten minutes in.

Unlike the episodic nature of ‘The Vampire Lovers’, this gives us more time to get to know the characters. Ralph Bates – in a role originally written for Peter Cushing – plays Giles Barton, a fascinating character who exudes prim fussiness as schoolmaster in an idyllic Finishing School for girls, but hides a dark desire. He is chided by the girls for being a pervert, whereas the less interesting hero Richard LeStrange (Michael Johnson), who lies his way into the position of supply teacher so he can ogle new pupil Mircalla more closely, is welcomed with open arms by the students.

Pippa Steele returns from ‘The Vampire Lovers’ to play a different, equally doomed, character, as does the splendid Harvey Hall, but the titular Carmilla has been recast. Instead of Ingrid Pitt’s mastery of seduction and devilry, we have Yutte Stensgaard’s far less complex interpretation. Well worthy of a mention is Suzanna Leigh as Janet Playfair, the schoolmistress who tries to attract LeStrange’s eye. Christopher Neame, one of a gaggle of villagers would go onto play Dracula’s servant Johnny Alucard in ‘Dracula AD 1972’.

Barton’s moonlit rendezvous with Carmilla is my favourite scene from the film. Barton wishes to be a servant of the Devil, having studied vampire lore and disposing of Carmilla’s victims. His crumbling entreaties to the unfeeling girl as she drains him of his blood are a perfect mix of seduction and doom. Almost as mesmerising is Carmilla’s later love scene with LeStrange. This scene has been much derided, mainly due to the inclusion of a song (‘Strange Love’ by ‘Tracy’) throughout its duration, but I really like it. With horror, you either have to ‘go with it’ or not, and this scene helps to sell the haunting, dreamlike atmosphere – and yet it is telling Hammer never tried anything like it again. Ah well.

Having succumbed to the charms of a mortal, Carmilla’s days (or nights) are numbered. The Karnsteins return to their castle and a fiery finale involves a burning wooden stake hurtling from the ceiling, impaling the girl as the Count and Countess face their fate. I’m not sure whether I prefer this to the previous film or not. Both have flaws – usually budget-related – but many merits too. One thing I am sure about, however, is that the final picture of the trilogy, ‘Twins of Evil’ ends the project on a high.