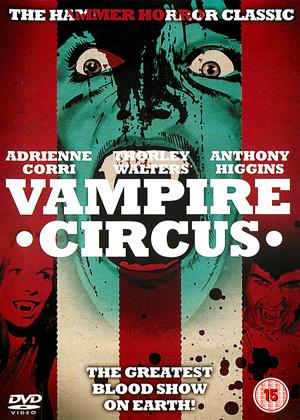 Some of Hammer’s most interesting films were made during their perceived decline and ‘Vampire Circus’ is one of the defining examples of this. It’s also probably the company’s bloodiest feature.

It also features their longest ever prologue. Set in the Austrian village of Stetl, director Robert Young dresses the sets and location with convincing detail. The curious practice at the time of dubbing voices is rampant here, with seemingly every actor re-dubbed (not always successfully), mostly by the original actor. There was, notoriously, not enough time in the schedule for Young to complete all his scenes – perhaps it was more economical to re-dub everything than re-take certain scenes.

That the film is quite ‘choppy’ in places works to the general weirdness prevalent in this macabre fairy-tale. It doesn’t quite flow as films usually do – especially in one scene. There are some students boarding in rooms upstairs to where the beautiful Dora is staying. They are only mentioned in passing and we never see them. We see the vampires converging at the house, witness some impressively subtle human-to-animal transformations but see nothing more. The attack on these unseen students occurs off-camera. The sound-effects Dora reacts to make the scenes border on parody. But that is the only obvious casualty of the impossibly tight schedule.

I wonder if Young had been allowed to film those last scenes, could the results really have been any better? ‘Vampire Circus’ is a sumptuous, occasionally ethereal weird bloodbath. The cast are faultless (only the dubbing threatens to spoil things), with the evil circus people emerging as more interesting than our heroes. Emil is played brilliantly by Anthony Higgins/Corlan – smiling and stroking the face of Albert (Laurence Payne) as they throttle each other; Lalla Ward and Robin Sachs as the two dancers, are twins both seductive and deadly (dare I suggest Rollin-esque?) and fresh-faced, young and sweet Lynne Frederick makes the most of innocent Dora; Robert Tayman is Count Mitterhaus and does very well considering he is definitely dubbed by a different actor and has to wrestle with some very outsized fangs. James Whittaker’s rich, layered score is among the most haunting Hammer ever featured. Sumptuous and atmospheric, this confident film belies the company’s fortunes at the time of release.