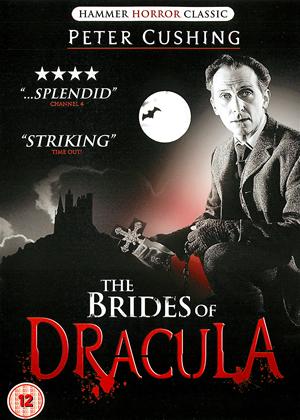 Synopsis:
Transylvania, land of dark forests, dread mountains and black, unfathomed lakes, still the home of magic and devilry as the nineteenth century draws to its close. Count Dracula, monarch of all vampire's, is dead. But his disciples live on, to spread the cult and corrupt the world... Young and beautiful Paris schoolteacher Marianne Danielle is on her way by coach to take up a post at the Badstein Girls' Academy where her journey is strangely interrupted... and she is persuaded to spend the night at the bleak, dilapidated chateau of Baroness Meinster. That night Marianne sees in another wing of the chateau the lone figure of a man, who turns out to be the Baroness' son.
She inquires why the Baroness had not mentioned him and is told that he is ill - mentally ill. She helps a young man escape the shackles his mother has put on him. In so doing she innocently unleashes the horrors of the undead once again on the populace, including those at her school for ladies. Luckily for some, Dr. Van Helsing is already on his way...
Actors:
Peter Cushing, Martita Hunt, Yvonne Monlaur, Freda Jackson, David Peel, Miles Malleson, Henry Oscar, Mona Washbourne, Andree Melly, Victor Brooks, Fred Johnson, Michael Ripper, Norman Pierce, Vera Cook, Marie Devereux, Susan Castle, Jill Haworth, Michael Mulcaster, Harry Pringle, Harold Scott
Directors:
Terence Fisher
Producers:
Anthony Hinds
Writers:
Jimmy Sangster, Peter Bryan, Edward Percy, Anthony Hinds
Studio:
Showbox
Genres:
British Films, Classics, Horror
Countries:
UK

Sign up
House at the End of the Street

Reviews (1) of The Brides of Dracula

Spoilers follow ... - The Brides of Dracula review by NP

A sequel to 1958’s seminal ‘Dracula’, without Christopher Lee as the main man, could very well have been doomed to failure. Initial signs weren’t promising. When offered to return as Van Helsing, co-star Peter Cushing turned his nose up at the script. The subsequent various tweaks and three credited writers improved things sufficiently for him to agree to do it, but the re-writes resulted in a few flaws in an otherwise flawless film – just who was the Man In Black who ensured Marianne Danielle (Yvonne Monlaur) was abandoned at the inn (and where did he go)? Why did Marianne swiftly agree to marry Baron Meinster after previously being made very aware of his atrocities, and if Meinster could turn into a bat at will, then why was he shackled by the ankle unable to escape? Also, what happened to the vampire ‘brides’ at the film’s close?

I had, and have, the biggest crush on Yvonne Monlaur as Marianne. Her air of innocence, naivety and elegance (the character was playing a teacher of deportment after all) made a ridiculous impression on me when I first saw ‘Brides’ in 1980. This fact has no bearing on my opinion of the overall brilliance of this early Hammer success. Before we’ve begun proper, we’ve had stalwart Michael Ripper as a coach-master tearing through a classic, misty, desolate wilderness. We’ve had superstitious locals desperately afraid for their new guest, Marianne. We have the imperious, mighty Baroness Meinster (Martita Hunt) initially frightening everyone before revealing herself as a terrified, tragic figure – and her ward Greta (Freda Jackson) is wonderfully (and persuasively) deranged whilst showing unswerving loyalty to her mistress. The performances here drip with a genuine class and confidence that we actually don’t actually miss Van Helsing, who doesn’t appear until almost halfway through the film.

In the absence of The Count, we need a nemesis for Peter Cushing’s immaculate, masterly vampire Hunter. Whether Sir Lee was approached or not remains unknown, but David Peel, shorter and wearing a blond wig, more than makes up for his absence. Incredibly, Peel gave up acting after this, which is a shame. Here, he is noble and aristocratic, seductive and deadly, of imperious gaze and an intoxicating voice. Billed in America as a ‘teenage vampire’, Peel was actually 40 years old during filming. He is utterly brilliant in this, and his scenes are all electrifying. Only his eventual demise is slightly disappointing– no slow-motion disintegration effects here, but we do get a spectacularly over-the-top special effect when the sails of a windmill are turned (by Van Helsing in Errol Flynn mode, naturally) to form the shadow of a massive crucifix that finishes off the injured Baron.

This remains a firm favourite of mine, and something I never tire of watching. The sets, the lighting, Terrance Fisher’s uncluttered but inspiring direction, the cast (honourable mentions for Andree Melly and Miles Malleson), the story – it all offers something new every time. And let’s not forget Meinster achieved something Dracula never did – he actually ‘put the bite’ on Van Helsing. His antidote to the curse still makes me wince.

Lovely, stately horror from Hammer at their peak.