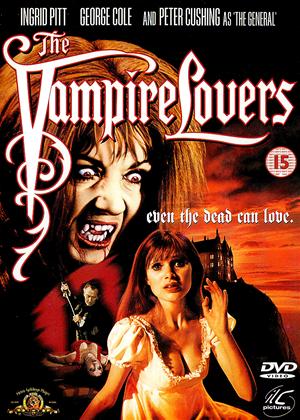 Reviews (2) of The Vampire Lovers

By 1970, the formula that had been successful for Hammer was sliding out of fashion. Audiences were tiring of the European ‘bloodshed and bosoms’ stories the company were releasing with regularity. Their answer was to up the quotient of both, and the cleavage on display here is provided by no less than three main players – Kate O’Mara, Pippa Steele, Maddie Smith and especially Ingrid Pitt.

Based on Sheridan de Fanu’s masterful ‘Carmilla’ tale, this forms the first in a trilogy of films to feature the titular character, although ‘The Vampire Lovers’ is the only one that really uses the original novel as its inspiration. The sequels, ‘Lust for a Vampire’ and ‘Twins of Evil’ feature Carmilla/Marcilla/Mircalla as an increasingly peripheral figure played, bizarrely, by three different actresses. Perhaps the writers Harry Fine/Tudor Gates/Michael Style were trying to suggest that not only does she transcend age and time, but occupies multiple personalities too.

After opening with a voice-over (strongly reminiscent of the opening of Hammer’s ground-breaking ‘Dracula (1957)’) and a convincing model effect of the castle, the low-budget is betrayed in a very studio-bound yet sinister graveyard as Baron Hartog (Douglas Wilmer) witnesses the arrival of a wraith-like vampire (Kirstin Lindholm) before beheading her. The story proper begins with the introduction of Marcilla to a rather threadbare party, where she is placed in the care of General von Speilsdorf (Peter Cushing) and his niece Laura (Pippa Steele). It is then that strange dreams and occurrences begin in earnest. Following Laura’s death, Speilsdorf is written out of the narrative for much of the film, leaving George Cole’s Roger Morton and his niece Emma (Maddie Smith – and her Governess Kate O’Mara) as Carmilla’s later protagonists/victims for a brief spell before he leaves ‘for Vienna’. Jon Finch plays young Carl, who completes the quartet of angry men with a grievance against the mysterious vampire woman.

‘The Vampire Lovers’ is an enjoyable, unpolished production. Occasional scenes are dogged by signs of the raggedness that was creeping into Hammer’s dense production schedule at this time. The inn where the butler Renton (splendidly played by Harvey Hall) visits is filmed in close-up to avoid revealing a lack of customers; there are recurrent location scenes featuring a tennis court complete with chain-mail fencing; also, the camera lingers on scenes of Carmilla casting reflections – although she happily exists in daylight, suggesting she is perhaps more than a vampire.

Perhaps the best scene is a brief one. Witnessing the funeral of one of her victims (although no-one has yet made the connection between the mysterious girl and the succession of blood-drained victims) in the woods, Carmilla is terrified by the religious symbolism, and the ceremony overwhelms her.

Whilst it is great when the four protagonists finally gang up to rid 19th century Styria of Carmilla, to have them fractured throughout the film means that each one is severely underwritten. They are little more than cogs that come together, rather than characters with personalities.

The greatest written part goes, of course, to Ingrid Pitt’s titular character. The actress rises brilliantly to the challenge of playing a seductive, occasionally vulnerable, centuries old vampire. Her apparent infatuation with Emma is brought to life more by the actresses than anything in the script, and that is what stalls her plans to seduce everyone in sight. Never a step out of place, Pitt’s charm and presence underlines how incredible it is that she never played the part in the following two films in this trilogy.

This is a simple tale of vampires. It has Peter Cushing, George Cole, Kate O'Mara, Ingrid Pitt and a young Madeline Smith. What's not to like if you want something uncomplicated. It is a feast of neck chomping and half naked women. This is ideal watching for an adult Hallowe'en Night. Trying to over-analyse this film is really pointless. It is what it is, pure entertainment.