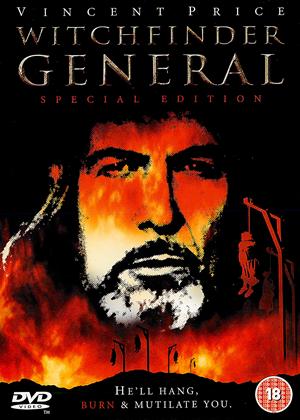 The disclaimer in this movie's closing credits that "any resemblance to persons living or dead is purely coincidental" is ironic, since many of the characters really existed, including the monstrously hypocritical Matthew Hopkins, his bestial assistant John Stearne, and the doomed priest John Lowes. And although the Essex landscape isn't technically a character, it features very prominently indeed throughout the film and hasn't changed much since the 17th. century, which is handy if you're making a low-budget movie set in 17th. century Essex. Almost unbelievably, the witch-burning scene was shot in the place where it actually happened.

Of course, it isn't a documentary and doesn't pretend to be, so its historical accuracy is patchy at best. But the use of genuine locations for all the exterior shots and many of the interiors gives it a very different atmosphere from Hammer's studio-bound horrors, which never quite seem to be set in reality as we know it, and don't try very hard to convince us that they are. One of this film's strengths is that it doesn't flinch from depicting the terrible things ordinary people are capable of, and the realism of the settings makes this even more disturbing. It's also extremely nasty for its time without ever glamourising the nastiness, whether it's the gloating sadism of Hopkins and Stearne or the increasing violence the hero is driven to. This DVD is in fact more violent than any version of the film I'd seen previously, thanks to the restoration of content cut from most prints, though I'm not sure that's a good thing, since the restored footage is of very poor quality compared with the rest of the film.

It's not quite the towering masterpiece some people would have you believe. Unless you're one of those misguided souls who can't stand Vincent Price, he's superbly horrible, toning down his usual hamminess to give Matthew Hopkins a coldness that makes him far more terrifying than the loveably evil cartoon villains Price typically played. We don't know much about the real Hopkins, whose autobiographical booklet "The Discovery Of Witches" (you'll find it at Project Gutenberg if you're interested) is a pack of self-serving lies so outrageous they'd make President Trump blush, so whatever motivation a movie chooses to give him is as good as any other. But this movie doesn't really give him any motive at all, which is a pity, as is the lack of any backstory to explain the casual inhumanity of the villagers without whom Hopkins wouldn't be able to do what, with infinite hypocrisy, he calls "God's work".

Hopkin's assistant, the almost subhuman John Stearne, is actually a slightly less appalling person than Hopkins, since at least he never pretends to be anything other than the monster he is. Robert Russell, a D-list bit-player who got a lot of work over the years as thugs and coppers but never achieved a performance like this again, grabs his one chance to shine with both hands and bites its head off, almost managing to steal the film from Vincent Price, which you wouldn't think was possible But it's slightly unfortunate that he's almost the only character we completely understand. Ian Ogilvy makes a thoroughly likeable young hero, but his descent into raving madness happens a bit too quickly and easily to be believable as anything other than a rather clumsy way of showing us that violence begets violence and evil is infectious. So overall it's a bit of a flawed and unpolished gem.

But it's still a gem, and it leaves you wondering what its extraordinarily talented young director Michael Reeves would have achieved if he hadn't died after making only three and a half films including this one. If he was alive today he'd be only three years older than Steven Spielberg. What a loss.

Opening with a very brutal, pre-credits hanging, ‘Witchfinder General’ goes on to feature an exceptional performance from Vincent Price, who despite a clash with Director Michael Reeves (Reeves declined to greet the actor at the airport on his arrival and made it abundantly clear he was not happy with his casting), names this as one of his favourite performances. It is easy to see why – he is given Matthew Hopkins, a Witchfinder steeped in hypocrisy, cruelty and genuine sin. Despite Price’s tendency to play extravagant characters, he invests Hopkins with a certain restraint, and is therefore extremely powerful: it is an excellent performance. Hopkins was a real life lawyer who, in 1644 elevated himself to witch-hunter, and is believed to be responsible for the deaths of 300 in the following two years.

There is a lot of screaming in this film. Indeed, even as the end credits roll, the heartfelt cries of Sara (Hilary Dwyer) threaten to drown out the music before they finally fade away. Such outbursts are entirely warranted, given the saturation of lies and duplicity that make the law by which normal people are expected to live their lives.

Michael Reeves died one year after this film’s release, aged only 25, his potential as a director and writer barely tapped. His work on ‘Witchfinder General’ is unstinting in its depiction of vile human behaviour and gleeful cruelty, the camera never in any hurry to move away from scenes of graphic violence and barbarism, not least from Hopkins, who misuses the word of God entirely for his own end. Hopkins dies violently, but not as graphically as he deserves, hacked to death by a crazed Richard Marshall (Ian Ogilvy), whose wife Sara has suffered innumerable terrible acts of maltreatment.

Whilst watching my DVD version of this film, there are many brief moments where the picture quality deteriorates noticeably – it suddenly struck me that these are scenes cut from the previous/initial release for reasons of bloodshed. Even with such pruning, the film provoked much outrage when it premiered. Despite this – or probably because of it – it was a success, even now held up as a cult classic. And so it should be. The way of life is presented in a way that causes the viewer to watch from behind their hands even today, and every member of the impressive cast is terrific, giving full-blooded, forceful performances. Donald Pleasance, Reeves’ original choice for Hopkins, would have provided his own brand of excellence, but this is probably Vincent Price’s finest hour – which is quite something for so prolific a performer.