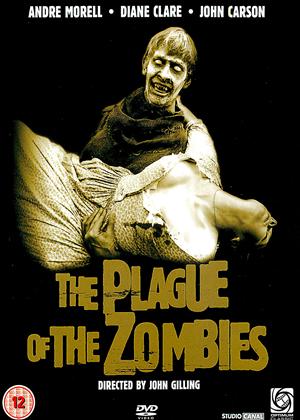 Rent other films like The Plague of the Zombies

Reviews (2) of The Plague of the Zombies

The Walking Dead: Year Zero - The Plague of the Zombies review by Count Otto Black

But of course you don't expect subtlety from Hammer. Though actually, as their films go, it is fairly subtle, with no gratuitous nudity or irrelevant lesbian scenes, either because they knew it was a good enough movie to succeed on its own merits, or because they couldn't persuade the leading ladies to get their kit off. It's possibly the best of Hammer's lesser-known movies, and although the zombies are underused prior to the extremely predictable climax, there's plenty of other stuff going on all the time as André Morell, very effective as the Van Helsing figure you might have expected Peter Cushing to play (some of Morell's dialogue right at the beginning sounds very much as though it was written with Cushing in mind), gets to the bottom of it all.

What really sets it apart is that it marks the transition between old-style zombies, grotesque yet pitiful slaves reanimated by magic who mean no harm to anyone except the fiend who made them what they are and only want to rest in peace, and George Romero's feral rotting cannibals. These zombies, though animated by Haitian voodoo to solve a purely economic problem in a very bizarre way, are bestial savages their master can only just control, and it's obvious that although their decaying brains no longer function too well, they can still feel primitive emotions, exulting in violence and perhaps a few other things too - it's made as clear as it could be in 1966 that the handsome, charming, and very rich baddie would have no trouble at all finding attractive female sexual partners who were still alive, but he prefers sleeping with dead girls. It's also the first zombie film in which the the spell that makes them walk doesn't stop them going all green and smelly (though, despite what this site's synopsis claims, they don't eat people).

Leading lady Diane Clare (the great-granddaughter of Buffalo Bill Cody, by the way) is a major problem because she can't act - most of her performance would have been more appropriate in a sitcom - but Jacqueline Pearce makes excellent use of what screen time she has, and André Morell and John Carson are a fine hero/villain combo. Plus it's nice to see my uncle's old drinking buddy Michael Ripper, the ultimate obscure Hammer actor who was in just about all of them somewhere, getting more to do than usual, and being cast as someone he can play convincingly rather than in whatever random part happened to be available. And some of the zombie scenes - one in particular - must have packed a real punch half a century ago. I can imagine George Romero sitting in the cinema thinking: "Yeah, I'm definitely stealing that bit..."

Spoilers follow ... - The Plague of the Zombies review by NP

Alongside ‘The Reptile’, a film made back-to-back with this, ‘Plague of the Zombies’ is widely considered something of a diamond in Hammer’s crown. And it is. Whereas ‘Reptile’ was infused with a rich Cornish atmosphere on which to base its tale of terror, only the realisation of the titular creature let things down. No such trouble here – in fact, the appearance of the zombies depicted in this John Gilling directed production went on, coincidentally or not, to influence many of the living dead productions to this day. Milky eyed, rotting, stumbling creatures, they are truly a sight to behold, especially in their first appearance: Diane Clare’s Sylvia Forbes stumbles through the night after her fragile friend Alice (the mighty Jacqueline Pearce) only to find her presumably dead, and in the arms of a shockingly revealed, grinning dead man. It is sterling stuff.

Peter Bryan’s screenplay sets the ball rolling immediately with a fox-hunt being carried out across countryside and village by a handsome troupe of violently arrogant upper-class young bloods. We immediately despise these cowards, and therefore hold Squire Clive Hamilton in both fear and high regard, as he appears to be their master. Hamilton is played by one of my favourite actors, John Carson, a superbly spoken gentleman who seemed to specialise in well-bred rotters. Had Christopher Lee not been available, I am convinced Carson would have made an equally well-received Dracula.

Andre Morell, another Hammer stalwart, is also a great presence here, as he is in all of his appearances. He plays Hamilton’s nemesis Sir James Forbes, a stuffy but very appealing professor. Brook Williams is also very good as the harassed young Peter Thompson. A word too, for the formidable Denver, Hamilton’s lackey and first class bully - Alexander Davion plays him wonderfully.

Apart from some unfortunate day-for-night sequences not quite convincing (a common problem from filmic productions of this time), the Cornish location is magnificently used. Superstitious villagers, scared locals, a charmingly manipulative and evil aristocrat, Michael Ripper, something strange going on in the mines – all terrific horror staples. And that dream sequence celebrated by Hammer fans, deserves all the accolades it gets.