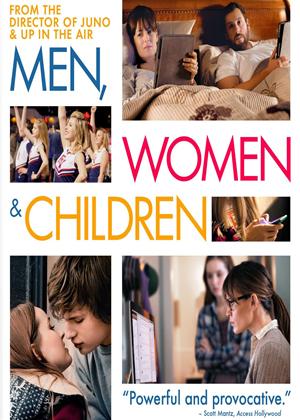 Synopsis:
"Men, Women and Children" follows the story of a group of high school teenagers and their parents as they attempt to navigate the many ways the internet has changed their relationships, their communication, their self-image, and their love lives. The film attempts to stare down social issues such as video game culture, anorexia, infidelity, fame-hunting, and the proliferation of illicit material on the internet. As each character and each relationship is tested, we are shown the variety of roads people choose - some tragic, some hopeful - as it becomes clear that no one is immune to this enormous social change that has come through our phones, our tablets, and our computers.
Actors:
Kaitlyn Dever, Rosemarie DeWitt, Ansel Elgort, Adam Sandler, Jennifer Garner, Judy Greer, Dean Norris, Timothée Chalamet, Olivia Crocicchia, Katherine Hughes, Elena Kampouris, William Peltz, Travis Tope, David Denman, Dennis Haysbert, J.K. Simmons, Colby Arps, Shane Lynch, Jason Douglas, Phil LaMarr
Directors:
Jason Reitman
Narrated By:
Emma Thompson
Writers:
Jason Reitman, Erin Cressida Wilson
Genres:
Comedy, Drama

Not released
Believe Me

Not released
My All American

Not released
The Late Bloomer

Not released
The Meyerowitz Stories

Not released
Walking the Dogs

Not released
Digging for Fire

Not released
Where'd You Go, Bernadette

Reviews of Men, Women and Children

In my day we didn’t have smart phones. Our mobile phones were big and bulky contraptions that had a low battery life and limited range. But technology has changed since then in big ways and our culture changes right along with it. Jason Reitman’s drama about the internet age attempts to find some deeper meaning in a society that buries itself within the online world. Perhaps too deep. I’m not saying he’s trying to create the techno-savvy equal of Tree of Life, but the movie does begin with a probe in space and then cuts to Adam Sandler masturbating with his son’s computer.

Let me say this before I lay into Men, Women and Children - Reitman has chosen a fascinating subject and approaches it somewhat maturely. He doesn’t fold into buzzwords of timely tech by constantly throwing hashtags and memes at the screen. The focus is maintained on how the suburban lifestyle and relationships have altered in the digital age. The parents approach the internet with fear and curiosity. The teenagers approach it as a secret hideaway to vent their frustrations and connect with their peers. There is a disconnect, but one that is more psychological than technological. When an overprotective mother fears the dangers online, she monitors her daughter's logs of communication on every device. The daughter is smart enough to switch out the SIM card in her phone to keep her relationship with a boy a secret. Trust is lacking, but intelligence is there as these people know how to use technology - even if they use it the wrong way.

Removing most (but not all) of the technological boogieman element, the story can focus itself just a little more on the family drama and not so much on the laughable understanding of technology (which there is still plenty of in this movie). That is if the movie could focus long enough on any of its various plotlines. Husband/father Don (Adam Sandler) arranges for a prostitute online while his wife Helen (Rosemarie DeWitt) has an affair through the Ashley Madison website. Through their secret romances, they try to find some happiness outside of their marriage that the online world has granted them. It’s an interesting topic, but never delved into much deeper than just a cursory examination.

Frustrated dad Kent (Dean Norris) attempts to connect with his son Tim (Ansel Elgort) after his mother leaves them. Kent hopes his son will snap out of it by getting back into football, but Tim finds himself buried in the online world of raiding dungeons. High school student Hannah aspires to be a famous modeler, but is oblivious to the perverted nature of her portfolio website. Her mother encourages the behavior the way she sells the photos and seems just as unaware of how damaging this all is. Another high school student, Brandy, finds herself suffocating under her mother’s constant supervision of her online activities. Once the mother/warden discovers she’s having a secret relationship, she becomes needlessly involved where it damages their relationship even more.

Perhaps I really am getting too old as I approach my 30’s, but these problems of the modern digital age just seem so silly to me. My high school years were the early days of online personas, but I still had online video games and chat rooms. There are some strange tales to be told from that era, but none so melodramatic as this movie implies for the youth of today. I must exist in that weird space between the young turks who hopelessly obsess over social media and the old codgers who cannot comprehend any of it.

The disconnect of parents and children from that angle could be unique, but the movie doesn’t have time for such a study. It doesn’t have time for much of anything the way it sets such large goalposts that are never reached. Throughout the picture is a sense of trying to comprehend our space and purpose in the universe. Constant references are made to stars and their relationship to our lonely nature of human beings in our current technological climate. But director Jason Reitman doesn’t allow us to connect the dots by either spoon-feeding the information through Emma Thompson’s narration or just skipping ahead to the next beat before we can dig deeper into the characters.

While there is something to be said of technology’s influence on dragging us apart as human beings, it’s mostly whispered and murmured in this picture. It’s clear that Reitman gathered up a lot of ideas for this project, but he does little more than cut up these small stories to create a sloppy collage of a snapshot for the 21st century digital age. How depressing to see such an accomplished director reduced to cliches and smatterings of half-thought drama. The cyber age just appears so laughable from this approach and perhaps it is. But what hope is there for a relatable drama when a frightened mother hands out pamphlets on the dangers of selfies?