3.6 of 5 from 49 ratings
Unknown
Sign up
Play trailer
Gallery 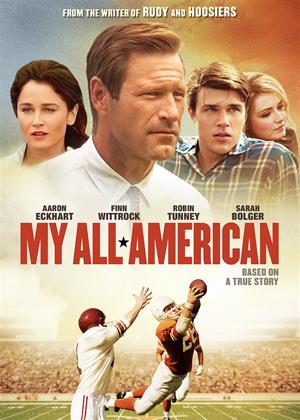 Reviews of My All American

My All American review by Mark McPherson - Cinema Paradiso

There are a number of football stories to tell of those who triumphed and almost triumphed. My All American is one of the second, where a fantastic college football player found himself with his career cut short. He never became an All American player but as far as an aged coach is concerned, that boy is his All American. And now the player has received a film as saccharine and safe as that last line.

The film follows the short-lived football career of Freddie Steinmark, played by Finn Wittrock. He’s just a simple Texas boy who does all the typical thing most Texan teens favored in the late 1960s; he just wants to play football and date the pretty girl. The film eases us into the era with that cheerful glaze of old-fashioned America and an accompanying soundtrack of the times, balanced out with a sweetly simple score perfect for sports melodrama. Football practice, nights out with his girl, having fun with the boys; good old wholesome fun sure to please to the aged football lovers of legacy and bore almost anyone else.

Freddie’s dream comes true when he gets to be a part of the 1969 Texas Longhorns football team. He has finally gotten the attention he was desperately seeking, surprised that coach Darrell Royal (Aaron Eckhart) would be so easily accepting of letting him play. And, hey, Freddie’s best girl Linda (Sarah Bolger) just happens to be going to the same college as him! What a fantastic and exciting life, portrayed so cheery that the lingering issue in the background of the war overseas and its hardship become mere distant echoes, where the protests only receive a handful of stern stares from Freddie before being pulled back from a brawl, as if the other actors are telling him to stay out of that kind of movie as it’s not worth it.

The film mostly sticks to football. Lots of football footage of practices and games with the most modicum of excitement, where we should be more impressed that the filmmakers were even able to stage a game as opposed to what character goes on that field. Kudos to director Angelo Pizzo giving it a go but there’s very little, if anything, present to make this film any more distinct from a plethora of other true story football films. Remember the other football drama When The Game Stands Tall? These scenes are about as standout as those.

Of course, tragedy strikes when Freddie’s leg is severely injured and x-rays reveal he has a tumor. And then sorrow sets in for when Freddie’s leg must be removed. He’s heartbroken, never being able to play football again. But the team still give him a smile and a tribute on the field, appreciating everything he did, the film presenting him as an emotionally manipulative centerpiece than a unique person.

My All American comes about as stock as football dramas come, with Pizzo merely pulling all the emotional chords more as though he’s staging football plays than crafting a movie. And I know that for a few of the football devout, that’ll be enough, where it’s more important to state the facts about Freddie’s career than create anything more meaningful. It’s a book report of a film where the intention is favored more than the content, trying to keep things his story safe and sweet for the family of football fans. But in doing so with all the same tired theatrics, it comes off more hollow than it should.