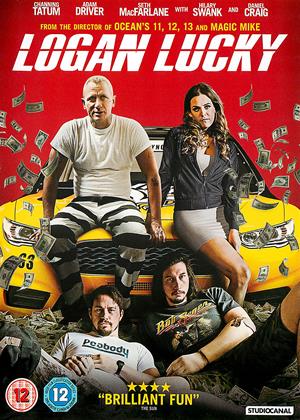 Not as good as I was hoping given the cast but I've seen worse... - Logan Lucky review by IB

Good to see James Bond, Magic Mike and Kylo Ren..... in different characters. I suspect they enjoyed making the film more than we enjoyed watching it.

That said, I have seen much much worse this year so if you have some spare time, chill out and watch some nonsense.

Not as good as I was hoping given the cast but I've seen worse... - Logan Lucky review by IB

Good to see James Bond, Magic Mike and Kylo Ren..... in different characters. I suspect they enjoyed making the film more than we enjoyed watching it.

That said, I have seen much much worse this year so if you have some spare time, chill out and watch some nonsense.

Surprisingly good cast for a truly mediocre film. It's too Americanised for many UK viewers and the heist theme is worn to the bone. The sound track was quite good though!

The plot is formulaic, and the movie is in serious need of tightening up - it's too long and sags so badly in the middle that I nearly gave up on it. There were some nice moments, though, and it ended well. I just feel that Soderbergh could have done a better job if he'd been really trying.

Can’t say I enjoyed this at all , very good cast poor film don’t waste your time watching this

Can’t say I enjoyed this at all , very good cast poor film don’t waste your time watching this

Was hoping to enjoy this film with the good cast that's in it, but nope can't even remember what the film was about now it was mediocre and americanised.

Paint by numbers, pick up the cheque... - Logan Lucky review by CS

A waste of acting talent and frankly a waste of viewing time. Old plot, no new twist, stereotypes, cliches....

I enjoyed this film, found it funny. Liked the odd characters, definitely taking the ' mick' out of certain folk in America. All good humour!

Strange film for Craig. He looks tiny when get amongst the fast food boys in States. Not a film to light up the awards boards for certain.

Had been looking forward to viewing this for a while, but sadly it was a big let down.

I have spent time working in Charlotte, and have even visited, and enjoy, the Speedway track, but this movie makes all the characters into “ local hics” and the plot is over complicated, and silly.

The talented cast are wasted on this one.

Fantastic film with a great plot and characters, Daniel Craig is amazingThe film is fast moving with enough twists to keep everyone guessing as to the outcome.

Steven Soderbergh has such an unpredictability that I always get excited to whatever he comes up with next. Logan Lucky isn’t exactly outside his comfort zone for a heist picture, given his experience with the Ocean’s Eleven rebirths, but it still manages to be a surprising delight. Shifting from swanky casinos and well-dressed robbers, this a heist of fast-paced racetracks and simple Southern folk. And it works as both an elaborate robbery and a brilliant cobbling of unique characters.

Channing Tatum slides tighter into the role of Jimmy Logan than any other movie I’ve seen him. In classic heist movie fashion, Jimmy could really use an income boost. He’s been laid off from his construction job at the Charlotte Motor Speedway. His ex-wife is moving further away from him, making it nearly impossible for him to visit his young daughter. Eager to make some cash, he uses his knowledge of the speedway to stage a theft of the gargantuan structure’s underground system of tubes for processing cash.

He hires a colorful collective of character to pull off this stunt. The uncanny soft-spoken genius and brother of Jimmy, Clyde (Adam Driver), is a two-tour soldier with an artificial arm and an unusually analytical mind. He’s no demolitions expert though and that’s where prison inmate Joe Bang (Daniel Craig) comes into play. And something like a prison sentence isn’t going to stop him from making some doe, arranging a secret prison break in addition to the secret heist. Keeping it in the family, Jimmy also employs his sister Mellie (Riley Keough) for extra assistance. And then there are the uniquely odd hurdles of the pompous English driver Max Chilblain (Seth MacFarlane) and pesky FBI agent Sarah Grayson (Hilary Swank).

Soderberg stirs this incredible cast together, as well as plenty of NASCAR racer cameos to keep atmosphere feeling authentic. As with the best of heist films, he keeps the energy high enough for screwball comedy but never overblown enough to feel like everyone is struggling for a laugh. Jimmy’s ignorance of pulling off this stunt is rather sweet as he goes about assembling his team. One particularly hilarious moment involves him hiring hackers by tapping two boys he believes are good with computers but seem to mostly talk big. And yet it all seems to come together so well, in the messy manner in which most comical heists eventually turn into.

The performances are astoundingly brilliant. Tatum has a naturality to being a working father and innocently trying to pull off the biggest robbery of the country with the most intricate of plans. Adam Driver has amazing comic timing as a straight-faced man with the beard and hair, too focused on specifics to catch the jokes that may zing over his head. Daniel Craig seems to be having a lot of fun as a demolition expert who isn’t quite as perfect as he may think. In one of the most exceptional moments of comic timing, he crafts a homemade bomb to blow open a safe and hides like the rest for the explosion. Nothing happens, he checks the bomb, and casually remarks that he forgot one ingredient more as though he were making cookies than explosives.

Logan Lucky is a well-oiled machine of a picture, never wasting a frame, character, plot development, or action. It deserves to be placed among the greatest of capers for such an unorthodox scheme amid a stellar cast that all shine bright. Soderberg proves once again he not only has a feel for tone but a knack for keeping the camera just as straight and informative as his script. And it’s just a lot of fun watching Driver play a straight-faced man with a fake arm, Craig playing a master schemer, and MacFarlane nearly disappearing into the role of a cocky English racer.