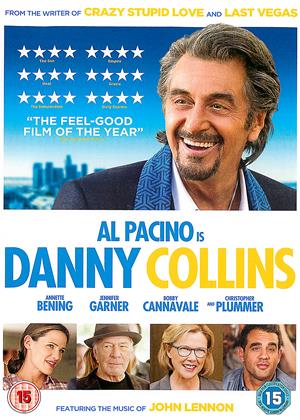 A cut above the average - Danny Collins review by BE

A superb movie from director, Dan Fogelman. Al Pacino never disappoints and is mesmerising as the lead character. The acting from all the cast is tip top but not over the top as is usual with many American actors. It deals with all human emotions and is one of the best American movies I have seen. I saw it at the cinema. It is so good, I have put it on my list to hire when it's released on DVD - something I never usually do! Thoroughly recommended - Al Pacino fans will adore this Oscar worthy film.

There is always an issues with films about pop stars - and that's whether one can believe that a character would have become a big star with the music used in the film.

Most movies fail in the regard unless they use cover versions (as in That's Be The Day from the early 70s, still the best of the best).

In this case, I simply didn't believe that the Al Pacino character would have become such a big star on the strength of a song (Baby Doll) that sounds like a weak B side.

The other problem with this movie is the way it trowels on the sentimentality - this is SO saccharine in the worst Hollywood manner. So we have family breakdown, the stereotype of a negligent father and bitter son, then we have a child (and OMG how unbelievably irritating this child with the fake 'illness' of ADHD is!) and a silly subplot about a wondrous school that can cure her, and then yet more illness - yep, the big C, cancer - worming its exploitative way into the script. I hated these parts of the film.

But it's good in parts, with a tight script (once it gets onto Al Pacino's relationship with his manager, for example) and some funny lines and scenes.

But it could have been a much MUCH better movie.

Watch right to the credits to see the story of the actual Lennon letter that was sent to a British folk singer - and which inspired the film (but this film is NOT a true story!)

To be fair, the missus and I lasted 15 minutes before we looked at each other and said, "Not very good, is it?" The whole idea of the film's namesake having become a singer of other people's songs after his self-composed debut album didn't prove popular is pretty ludicrous. As usual, Pacino has lots of energy — entirely too much energy. We didn't believe a moment of it, and found it annoying enough to eject before there was much of Ms. Bening, who's almost always terrific. Two stars, rather than one, because it wasn't an Adam Sandler fartfest or a Quentin Tarantino bloodbath. One star should be reserved for the ULTRa-dreadful.

Movies are like meals some peoples likes are others "no thanks". But this film had Pacino (of whom one "respected" reviewer once famously said "I could'nt enjoy any film with Pacino in it"!) Presumably "The Godfather" was not to be enjoyed?

My personal view is that AP is a fine actor if at times a little loud. In this movie Pacino is really good in a lovely tale with a fine "supporting cast" And that is an understatement as to the quality of that cast.

Bit of a schmaltzy offering for Al. Most of the old hard case crook types are doing light comedy now. Flows quite well, despite the slightly loose story. Always dodgy doing anything based on music industry!

It happens to the best of actors. One day you’re an A-lister appearing in the greatest movies of all-time, the next you’re an old man doing soft melodrama roles. Al Pacino has reached that phase with Danny Collins, but he narrowly avoids falling into sappy pitfall of an easy paycheck. He has the aid of a fantastic screenwriter turned director (Dan Fogelman) and a brilliant ensemble cast (Christopher Plummer, Jennifer Garner, Annette Bening). But it’s mostly Al Pacino’s performance that catapults this picture past the usual overly schmaltzy and tidy storytelling built for the older crowd.

At first, the story seems fairly predictable. Pacino plays the titular character as an old rock star that still plays to crowds of the elderly. His path of riches, younger women and cocaine is shaken when he receives a fan letter from John Lennon dating back to 1971. Deciding to proceed on a different route, he takes up residence at a Hilton in New Jersey to both write new material and make amends for neglecting his son Tom (Bobby Cannavale). Additionally, he tries to come on to the hotel manager Mary (Annette Bening).

Danny approaches all of these situations with a high level of energy charisma. He’s excited about starting anew as a songwriter, lover and grandfather. But his enthusiasm is not met by Tom or Mary considering they’re not fans of him as an artist or a father. He does his best to work his way into their hearts, but is not prepared for certain factors that come as a surprise. To warm up to Tom and his family, Danny offers to pay for Tom’s daughter Hope that requires special education with her ADHD. He figures that will be enough to at least apologize for his misdeeds in walking out on his son, but then Danny is delivered the bombshell of Tom’s Leukemia.

There are plenty of shifts in tone for Danny being sentimental about his career and his desperation to reconnect with family. But this is also a movie that doesn’t want to take the easy route for its drama. You can sense the bucking of formula when Tom reveals his Leukemia and remarks that Danny wouldn’t be getting the melodramatic movie-of-the-week ending he had foreseen in his mind. The constant surprise makes it all the more enjoyable with likable characters. Christopher Plummer is a riot as Danny’s snarky manager, filled with both affection and crass. Annette Bening has the right pitch of manager trying to maintain a smile despite her initial disapproval of Danny. Even Giselle Eisenberg as little Hope was rather exceptional, serving as more than just dressing on the plot.

The holding back is what makes both the script and Pacino’s performance shine brightly. It would be so easy for a movie such as this to go overboard with Collins’ wealth, fame and drugs. But the movie is thankfully kept to a more personal tone rather than something grander. While Danny is writing new material, he decides to show it off at a small club. There’s something very relatable about this in comparison to Pacino’s career. His last few films have been forgettable action and low-brow humor. And now here is a film that gives him real character with a smart and engaging story to work with. It won’t win him an Oscar or make him the talk of the town once more, but, as his character keeps referring to conquering his addictions, ‘baby steps’.

Danny Collins is a genuine surprise with unexpected emotions from a usually predictable formula. It’s emotional without being soapy and comical without being vulgar. It also doesn’t sell out with a simple happy ending and leaves it fairly open whether or not the audience wants Danny to succeed. Considering the wealth of heart in all the characters present, I really did hope for that shmaltzy finale. I can do without the swelling music though.